Create your own page to highlight your diecast collection and latest additions.
Post Reply
218 posts

Hey guys, Dennis here. I think many would agree that the Ikea Bertby display was practically made for 1:18 die-cast but was unfortunately discontinued for safety reasons (I think). I had never really intended to buy it when it was readily available, although I loved the seamless floating look and how organized the cars looked facing the same direction at side profile, but hated the fact that you had to mount it on the wall. But of course we all want what we can't have and so, after it was discontinued I turned to Kijiji.

It was definitely a challenge to source them. As I type this now there are none available for sale, just a helpless want add. I was very fortunate to stumble across one Kijiji back in late 2012 where a extremely nice lady was selling five birch units for $100 a piece so I fired off an email wanting all five but unfortunately someone had already called for three so I scoped up the last two. The first problem was that they were located in Mississauga and as I live in London I had to arrange a trip out on a weekend and had to have her hold them for me. I wasn't getting my hopes up and kept my expectations low because as this was a hot item so I knew she was being bombarded with interest.

The weekend rolls around and before I leave for Mississauga she tells me that the first guy backed out and all five were mine if I wanted them! Of course I said yes immediately and thank dad to lend me his van. Initially since I thought I was only getting two I was going to take my car. When I arrived to her house I realized that my car wouldn't be able to fit two anyway. She told me that many people were inquiring for all five as well and she even got offers during the week that they would come pick them up immediately but like I said, she was extremely kind and trusted me that I would not back out.

Sorry for the longwinded post. If you read all that I give you 1,000 internet points, redeemable nowhere because they're fictional.

Here they are loaded in the van back in 2012. They sat in my parent's basement since.

Now that I've moved into my own place I have found a permanent place to display them in my living room. At first I wasn't 100% on putting them in my living room to keep it more neutral, my other idea was to put them in my office, but I feel this would be the best location to share with people until I get married and she makes me move it.

Sorry pictures suck..blame HTC and incandescent light bulbs. I should also point out that I'm painting them white. They're currently in my garage being prepped.

Will provide more updates this weekend. This is my first long weekend where I made sure I had no plans so I can tackle this project..not sure if I'll have time to put them up but we'll see.
Last edited by Kwando on Tue Sep 06, 2016 9:59 pm, edited 5 times in total.
Top

Was looking for these recently. Couldn't find any, so settled for 2 Detolfs for $30/a piece
Top

Great thread! I'm not sure what IKEA's thinking was but there clearance of the Bertby cabinet left a void for us collectors... I too was in search for one as I need more space and the Bertby would be the best cabinet to fill it - right behind the door in my office. A lengthily search on Kijjji found me one after 3-4 months. Seller had 4 BNIB that he had for years an never used. I only bought one, big mistake!

Are you going to modify to add more shelves? I did, easy as pie! I also have a source for glass shelves if required. 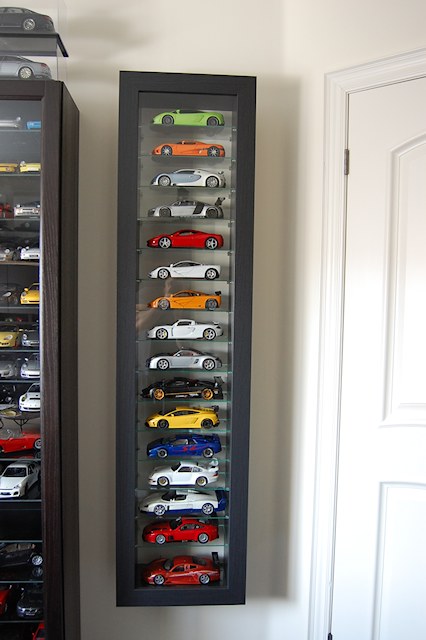 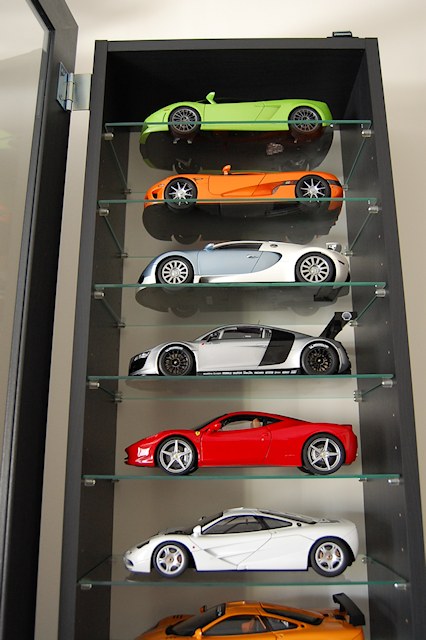 Thanks I will let you know! Right now I think I'm with glass for now as I prefer to have more space between the cars but might change my mind when I get the cars in.

Do you have any pics of how you mounted it? I've been debating with my dad on the best way to mount them to be the securest way possible. Did you mount it to a stud? I"m thinking I need toggle bolts but my dad doesn't think it's necessary. These things are heavy!
Top

Where it was placed I could not hit a stud. I used the provided hardware with toggle bolt on the bottom section. No issues. Sorry no photos.
Top

These are the best diecast cabinet ,flexible and by size . I seen one loaded with diecast at Kraftig office looks very nice
Top

I'll be following this post closely! I'm thinking of the best way to display my models when I eventually move into a house

I love the look of these shelves...though the Billy suits the size of my collection, more.
Top

It doesn't look like much has changed but I've since sanded them and applied two coats. If I went back to do it again I may have used a more corse grit sand paper as I don't think I did much. I would have also considered spray painting them because I used a roller and it's not very smooth..but the texture is growing on me. No close up pics of that though.

I choose white because it goes much better with my decor so I'm very pleased with how they turned out. I might apply a third a final coat. I think the white will really make the cars pop, though.

I was wondering why you would go through the trouble of painting. Looking good.
Top

[KRAFTIG] wrote:I was wondering why you would go through the trouble of painting. Looking good.

Your OCD is that your models have to be perfect, while my OCD is that my decor has furniture has to match or compliment each other lol. The beech just wasn't cutting it. If I was able to find 4-5 black or silver ones, I wouldn't have painted them.
Top

[KRAFTIG] wrote:I was wondering why you would go through the trouble of painting. Looking good.

Your OCD is that your models have to be perfect, while my OCD is that my decor has furniture has to match or compliment each other lol. The beech just wasn't cutting it. If I was able to find 4-5 black or silver ones, I wouldn't have painted them.

I can't wait to see the bertbys mounted Denis! Btw, congrats on your new place!
Top

Small update here. Paint is done and not perfect..it's flaws are visible up close but good enough. Hopefully people won't be examining the finish too closely once the cars are in there. I also cut some bottom wall mounts that the shelf can sit on. These were included with the original hardware but since mine were second hand and didn't come with any I had to use my own. I think they're 1"x2"x13.25". Also picked up a set of toggle bolts 3/16"x2". I didn't feel 3" or 4" was necessary. I also got some extra pieces of wood I'll be putting behind the wall to make some extra bracing. I'm going to start putting them up this weekend since I'm working on another house project simultaneously.

I decided to sell the fifth one because painting them was such a pain and there's really only room for four.

Looking good. You'll regret the sale of the fifth one, there is always room somewhere else in the home