Review or compare your diecast models here. Manufacture versus manufacture or brand versus brand.
Forum rules
Welcome to the the DS "Model Reviews" forum. The rules here are quite simple. Please build your review thread with detailed information and photos as you would any other post, but please adhere to the few simple rules below. Any questions please direct to Administrators or Moderators. Thank you the DS staff.

1) ADD "REVIEW:" to the beginning of your description field
2) Separate EACH photo with 1 line spacing
Post Reply
3 posts • Page 1 of 1

The E38 7 series. It perfectly embodies the low, sleek sedans of the 90s. Spot-on proportions. An era before pedestrian safety regulations changed automobile waistlines for good. And in Alpina form, it was the closest thing to the M7 we never got. Looking at the B12 20 years later, it could well pass off as an excellent restomod! 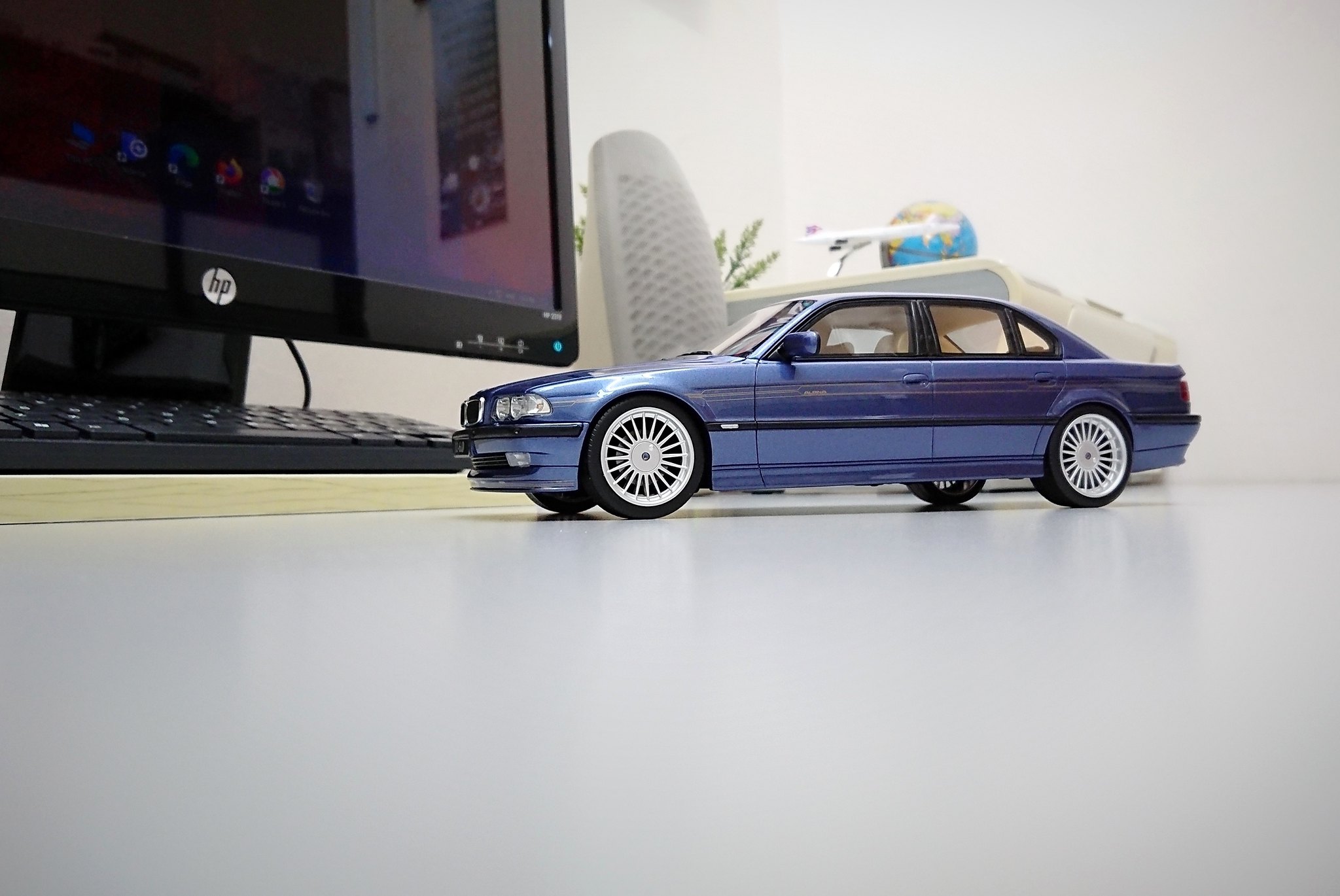 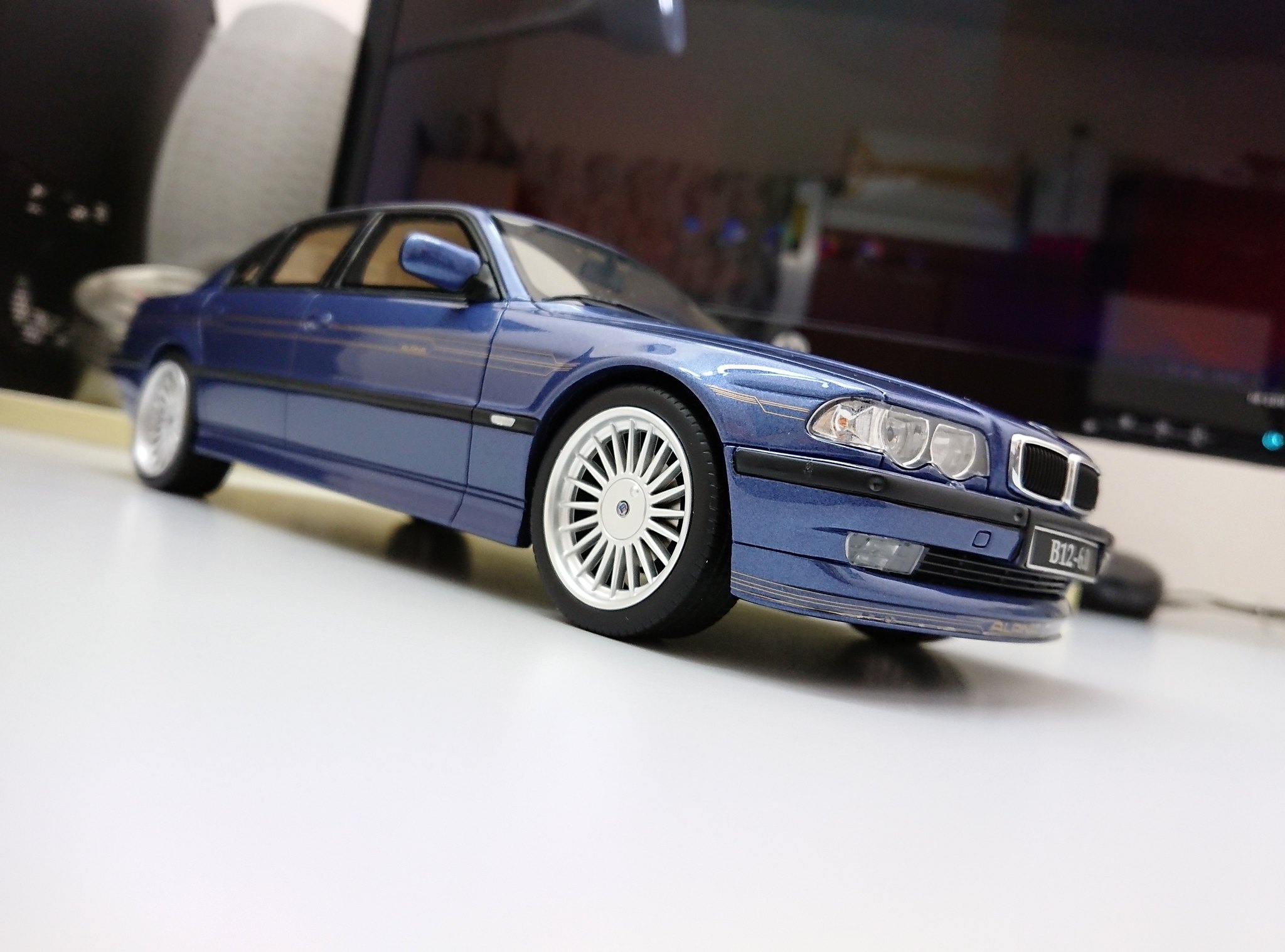 And so, another sealed resin under the spotlight today. Enter the Ottomobile E38 Alpina B12 6.0. My first resin, because I didn’t have much of a choice. With niche models like this, if you’re hungry enough to get your paws on ‘em, the deal is sealed anyway (no pun intended). I had let go of a previous opportunity to get Otto’s older E38 750il release in black many years back, and didn’t want history to repeat. Some might say, hey, there’s a diecast E38 made you know. I know, but would you take that over this Alpina?

A quick glance on ebay was quite discouraging. Pre-orders were €59.99 (exc. shipping) but now they’re going for €150 average, and rising. I missed the pre-orders, but given that this was a recent release, I still kept browsing for a decent deal. After some bargaining with an obliging seller, secured my unit at €95 + €20 int’l shipping. Not too shabby, but still pricey for a resin. Happy to report that The Ultimate Driving Machine arrived in pristine condition all the way from Germany to Malaysia. 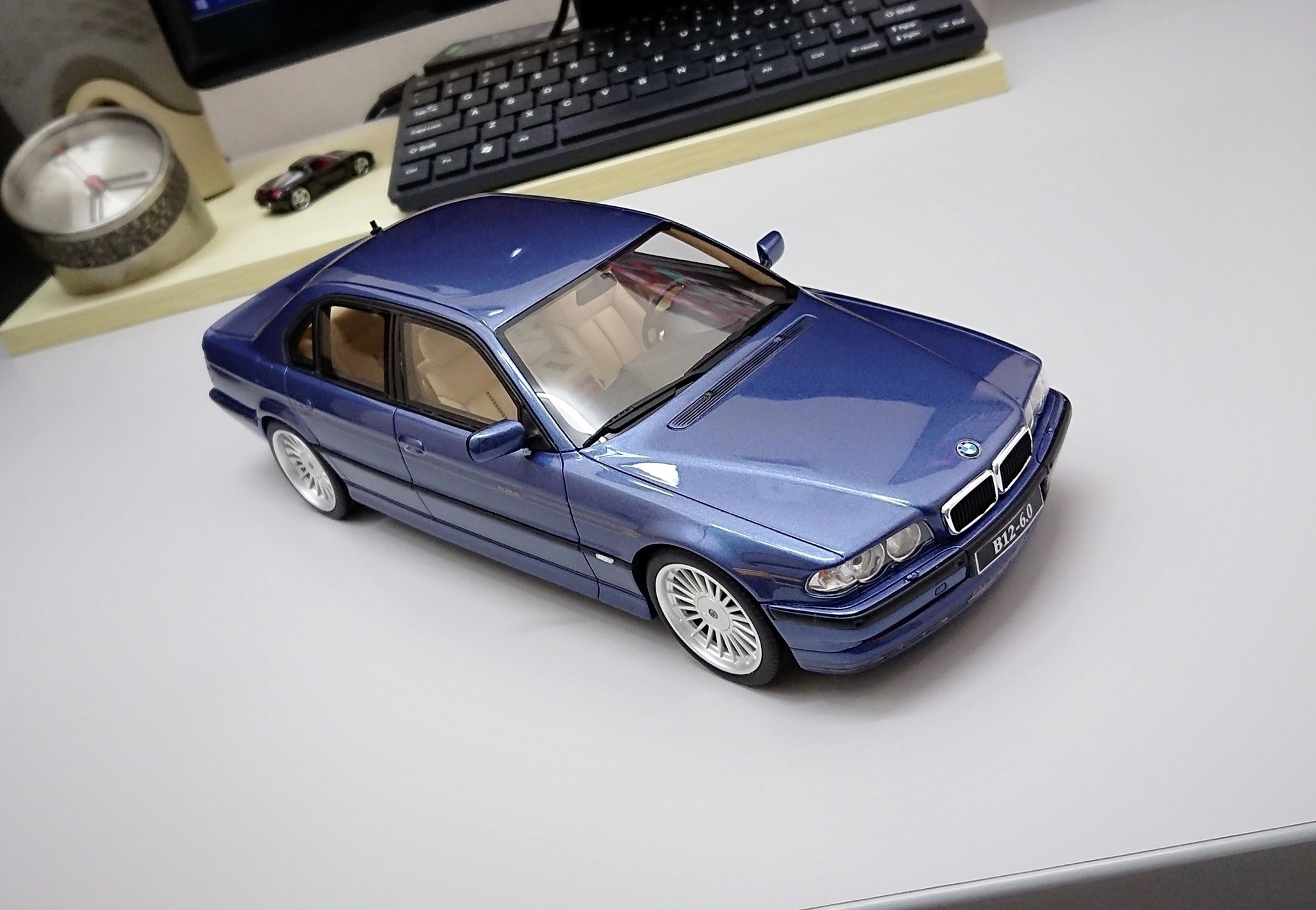 Coming to the looks, the 90s were the height of conservative design. What separated the E38 was some subtle aggression perfectly baked into its classic lines. The combination of the car's length, a low shoulder line and large wheel arches contributed to the squat, powerful stance. Perhaps describing the design language as ‘assertive elegance’ sums it up- something many other sedans of its day could never quite grasp. The secret sauce, so to speak. And I’m happy to say our 1:18 here has faithfully reproduced this sauce- the hallmark of any good display model. To sidetrack a little, you will find some elements of this design philosophy in our modern day Volvos! 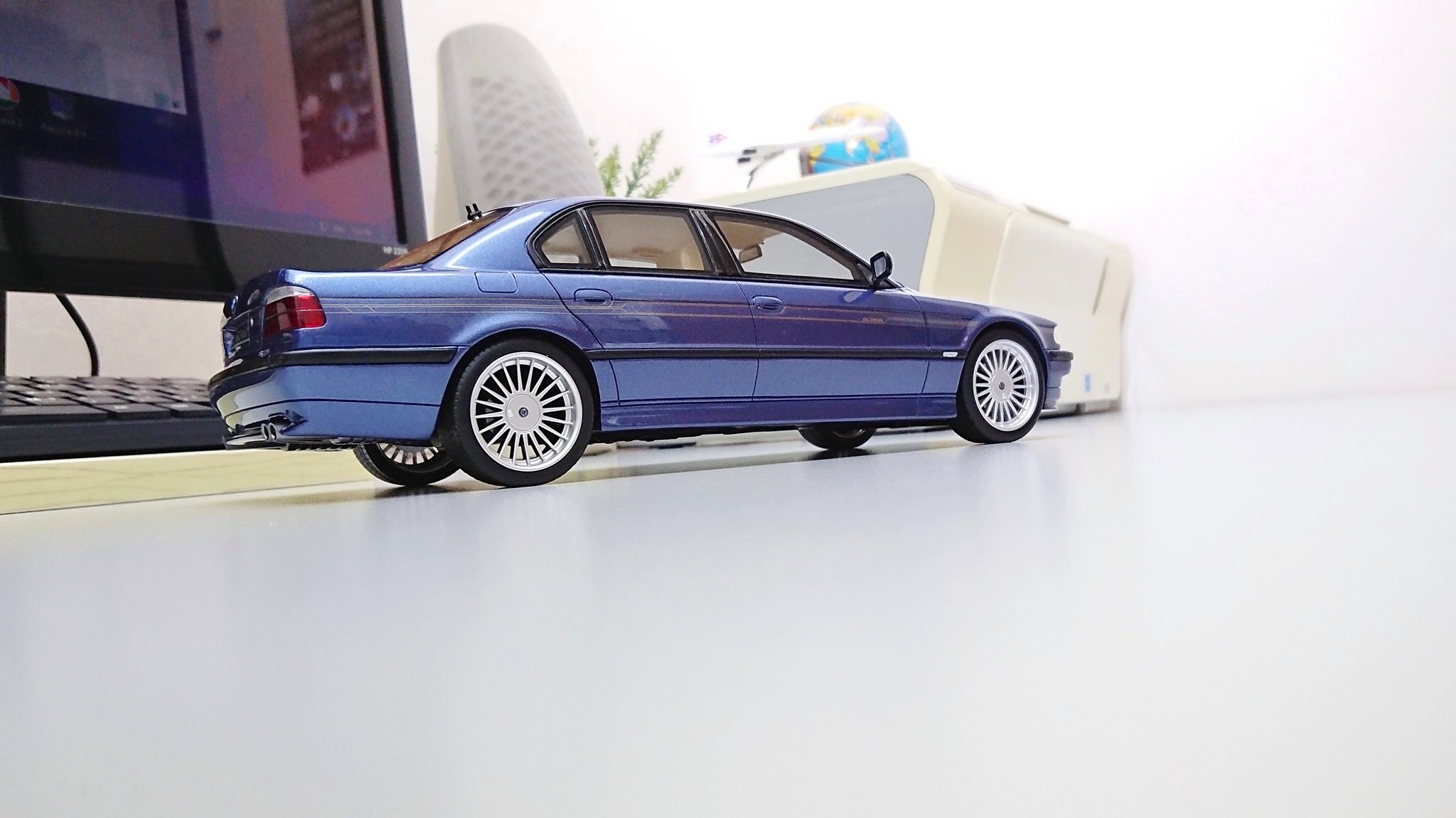 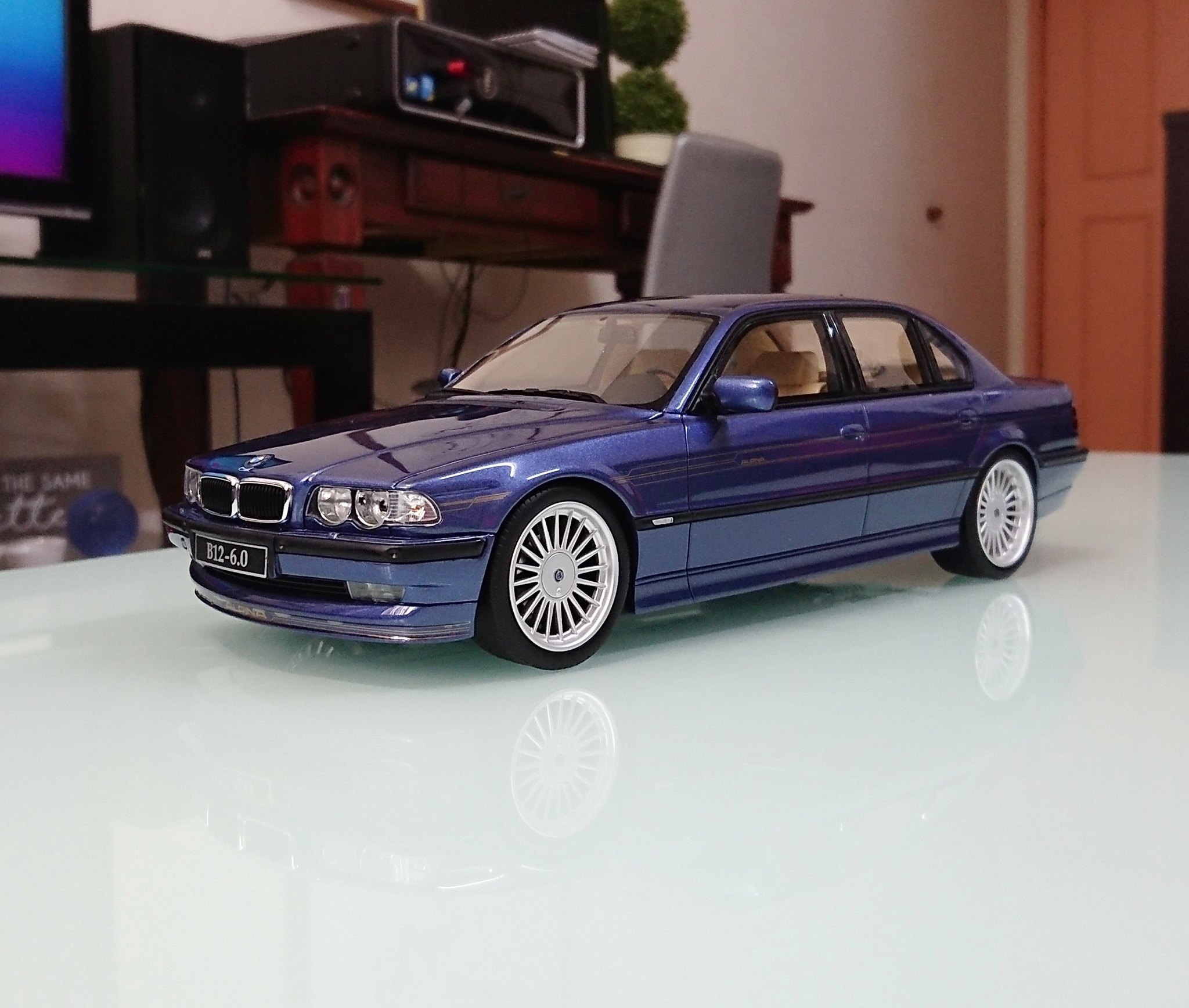 Back to the 7: As captivating as the car may appear, like most things it’s not quite perfect. Time to take a closer look then.

The good stuff: Being my first ever resin, I was impressed by the serious heft and solidity. Quick knocks on the body panels produced reassuring thuds all over. Good. However, the super thin plastic sheet windows are at odds with such a solid model, so careful handling is required.

Right out of the box, you’re greeted with a very mature looking model, right down to the muted blue paintjob. A suitable shade for a car with a very business-like vibe to it. The blue is nicely matched to some black gloss trim on the windows giving off a sporty, contemporary look. Couple that with a beautiful beige interior for contrast, and you’ve got a very pleasing colour palette. Also note that this model features gold Alpina stripes all around, but there’s also a white stripes version. Both look fine, with the white looking a tad sportier and the gold more understated. The shutlines are well defined for a resin, and the trademark character lines running along the sides are crisp. The headlamps feature beautifully realistic lenses & housing. Finished with the very regal looking Alpina 20 spoke radial wheels (yes, all 20 spokes are there). The rear tyres are wider too. But is it hard to have steerable front wheels on a resin? Still on the exterior, there were some glue residue present, but nothing that a mild clean up couldn’t take care of. 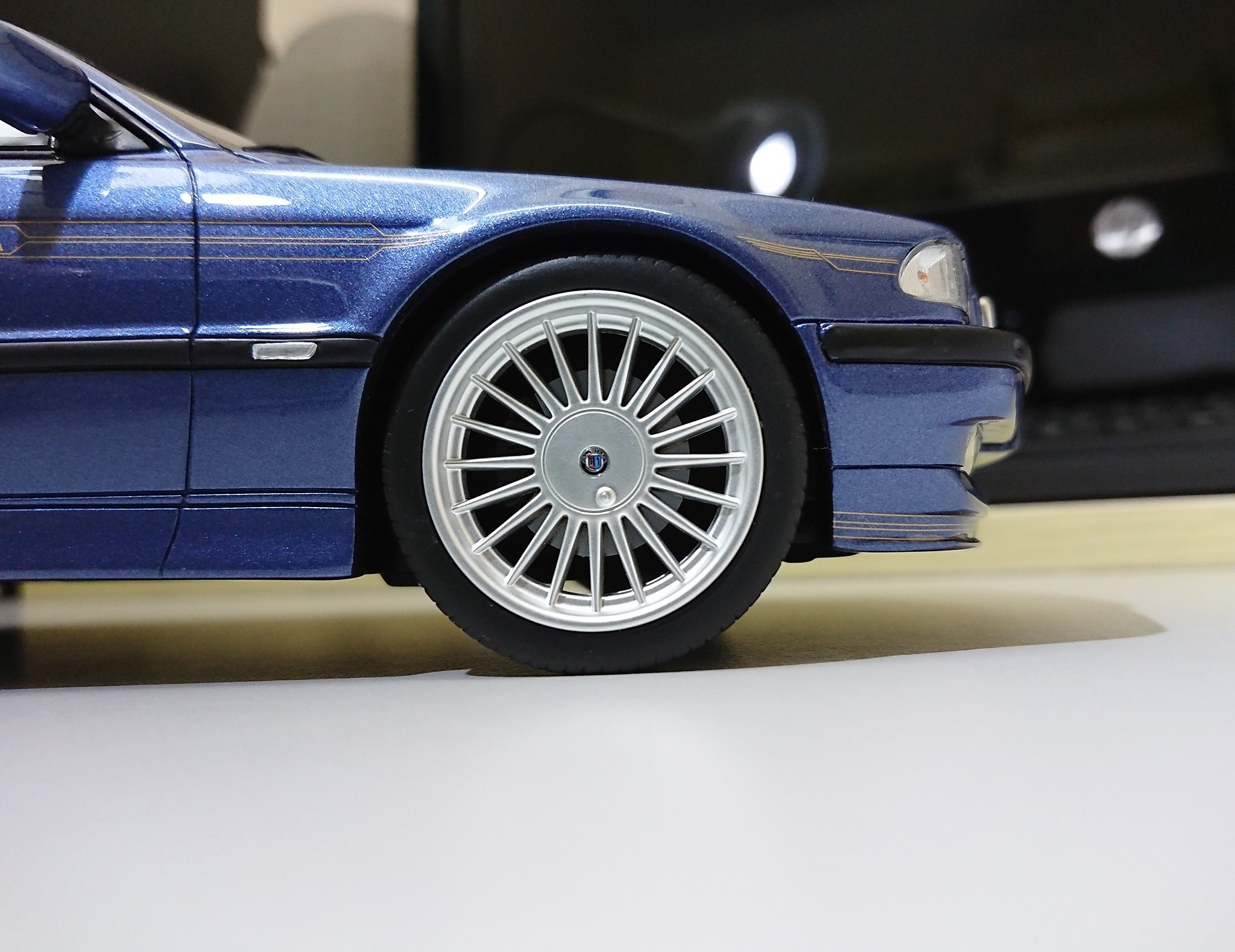 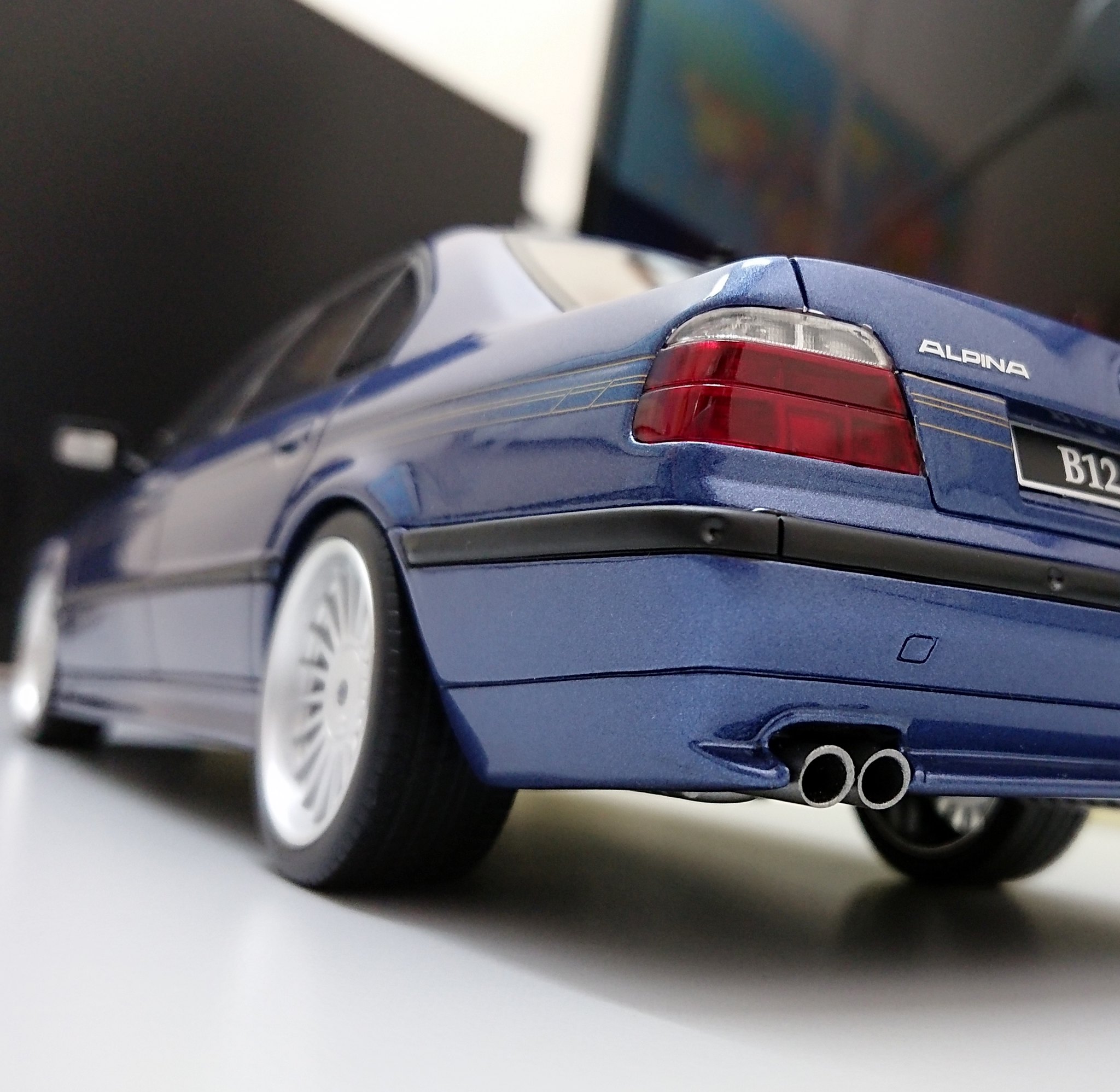 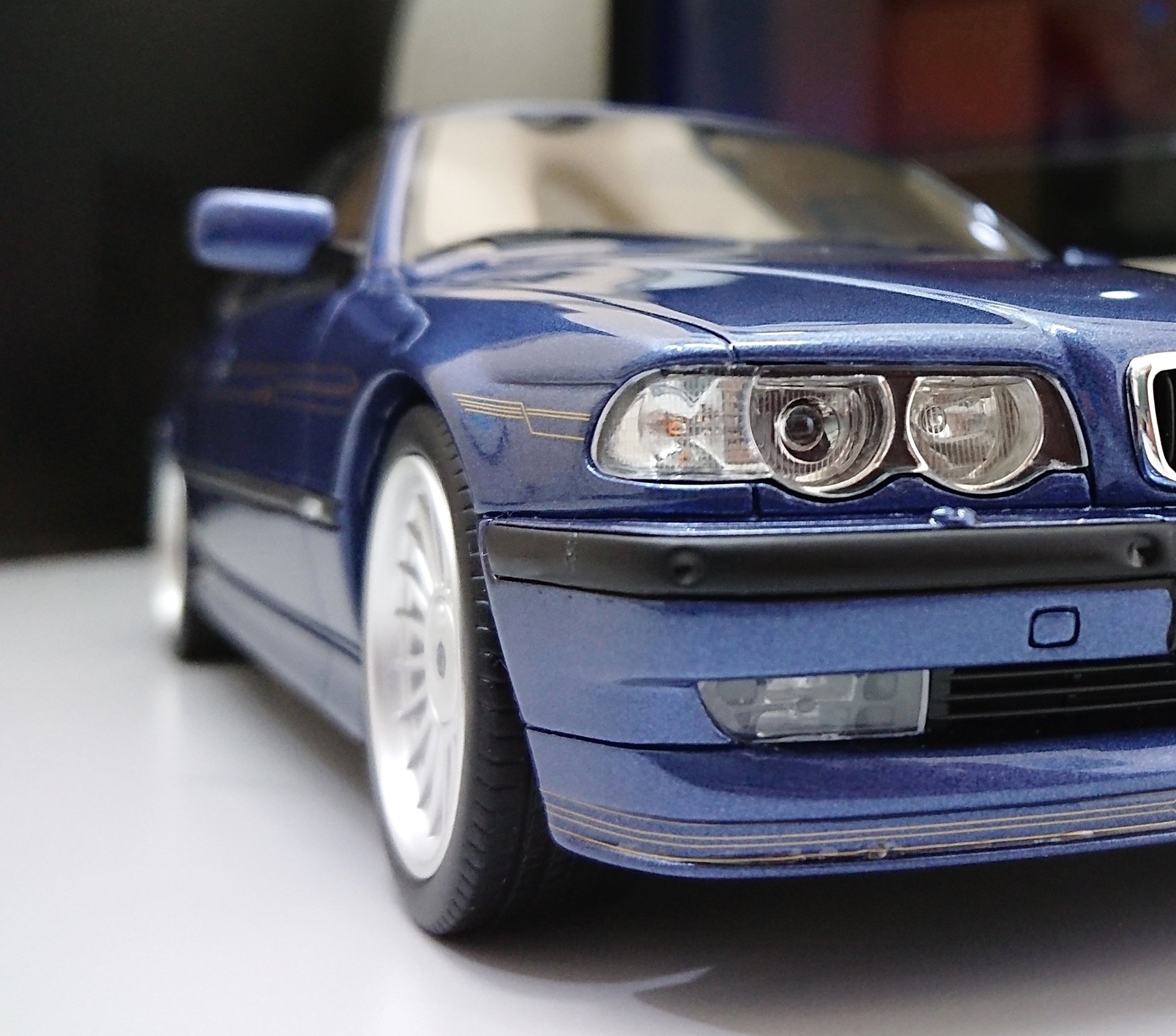 Moving on to the interior, high points to Otto for giving us bright colours! As per the real Alpina B12, we’re getting a creamy beige phone on the armrest, those classy royal blue carpets and Alpina pattern stitching on the seats. The wood trim is nicely done, with realistic swirls. One detail easily missed is the Alpina logo neatly printed just under the front passenger air vent on the far right of the dashboard. The navigation screen looks pretty convincing, with a switched off look vs the colourful navigation display in Otto’s previous E38 release. Wish they had painted the rear reading lights though. But overall, the attention given inside is pretty pleasing. 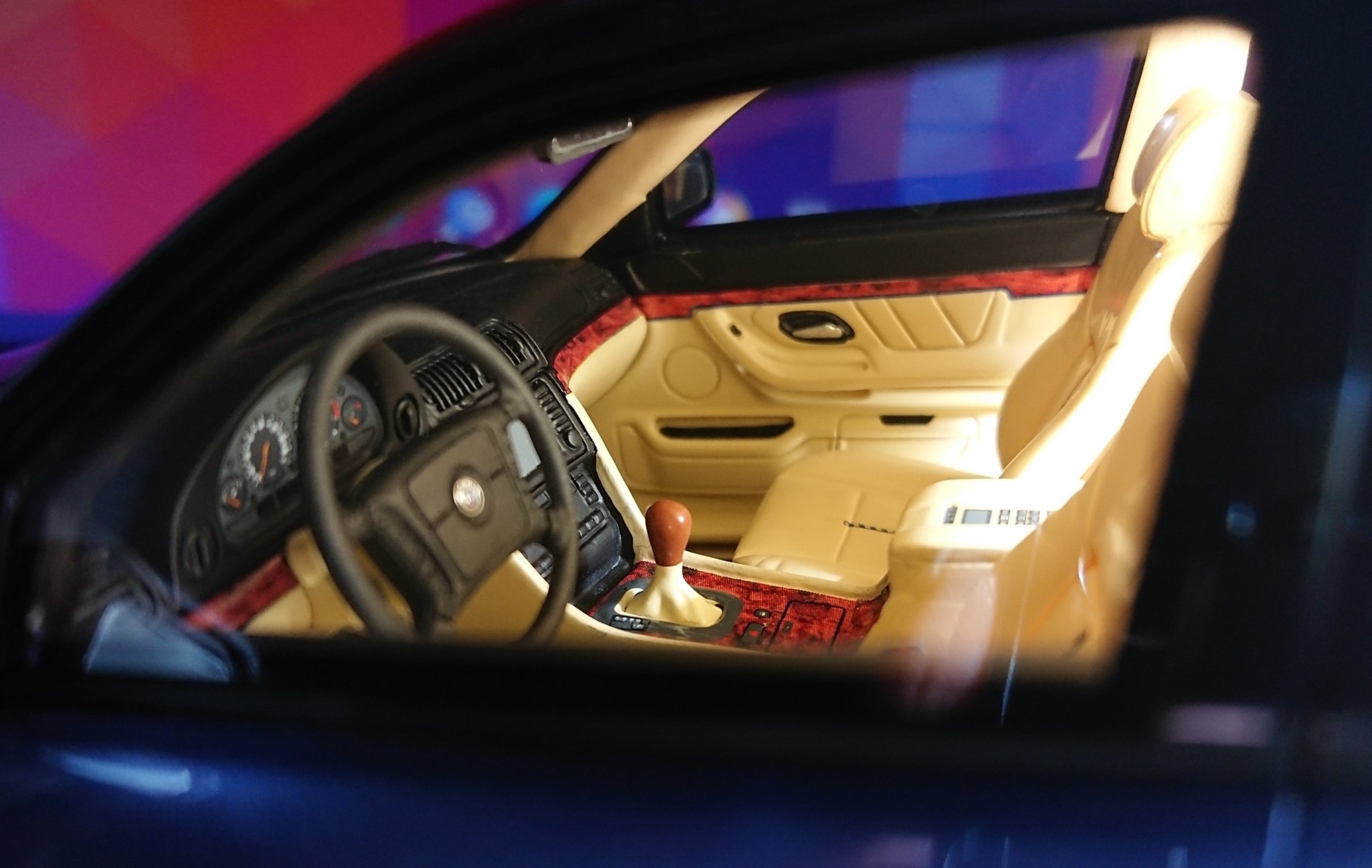 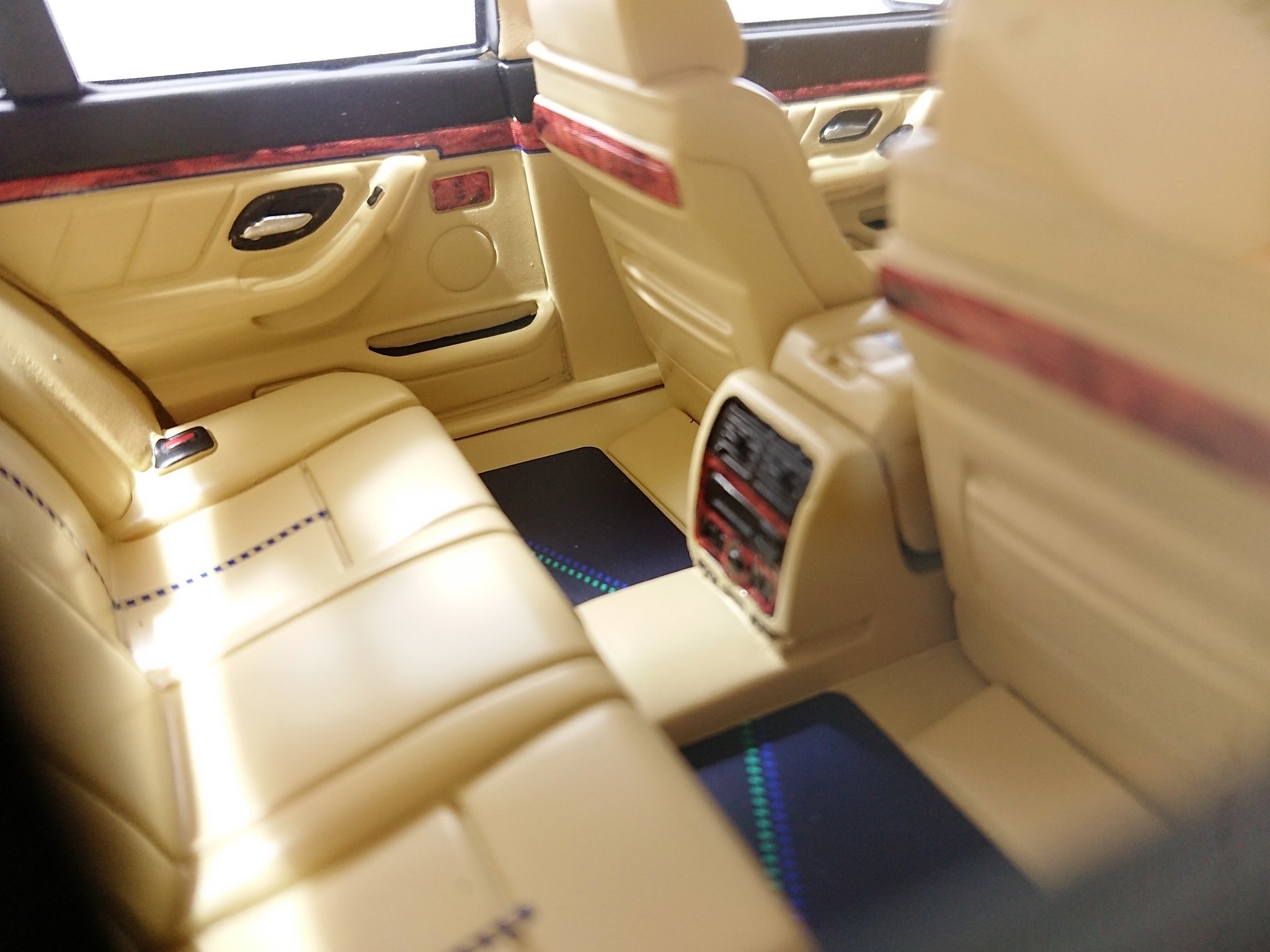 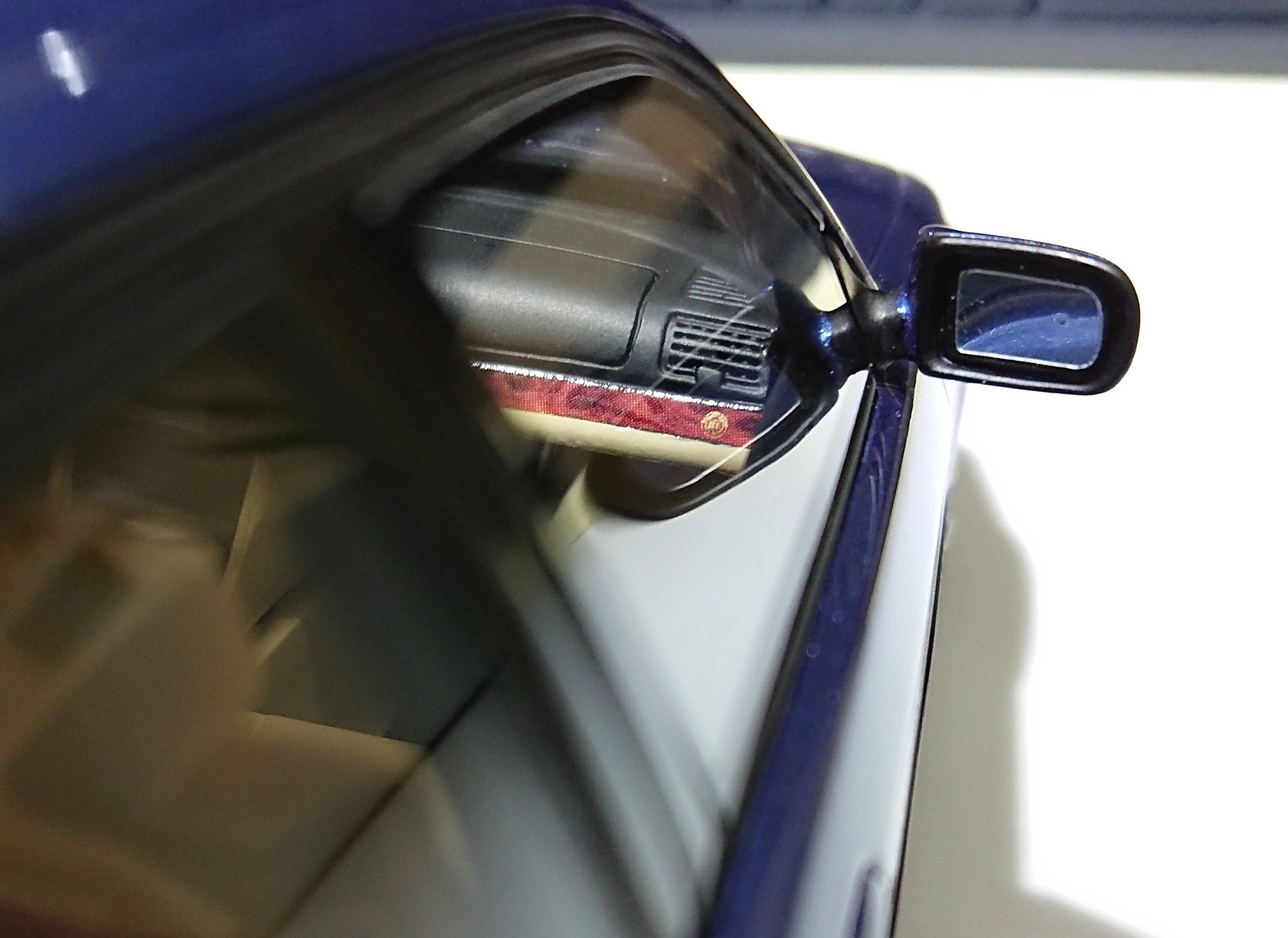 As for the things that could be better: As mentioned earlier the very thin, flexible plastic sheets used for the windows require care when handling. The headlamps, though very realistic, should be a tad slimmer. But here’s the big surprise: on this casting, the B pillars have actually been moved backwards to give the illusion of a short wheelbase E38. I had been staring at the interior wondering how could so much legroom exist in a short wheelbase model.. until someone had pointed it out online - Otto re-used the previous 750iL casting for this supposedly short wheelbase Alpina! A quick look at the front door cards inside confirms this. But if you can look past that, it’s still okay, because the length of the model only adds to the elegance. Comparing with photos of the real car, shouldn’t the front wheel track be a bit wider? Other observations: the rear seats are too chubby & why are the center air cond vent slats vertical instead of horizontal? Why Otto?

Accuracy issues aside, the interior also drops the ball a bit when it comes to detailing quality. Don’t get me wrong, the details are certainly there, but the execution could be less sloppy around the edges. For comparison, my affordable Welly & iScale models both boast sharper looking interior trims- so I believe we can expect better here. This is a static model after all, not faced with higher manufacturing costs & complexities of opening diecasts. Hence the trump card for resins should be better representation, at any price range.

I may sound disappointed, but on the contrary, I’m still pleased with the car. It’s quite a surreal experience holding an E38 in the palm of your hand, a dream from the pages of your childhood magazines. The Alpina treatment is just off the charts . We’ll see if Otto decides to make a another variant in Alpina green or deep purple.. Hmmm. 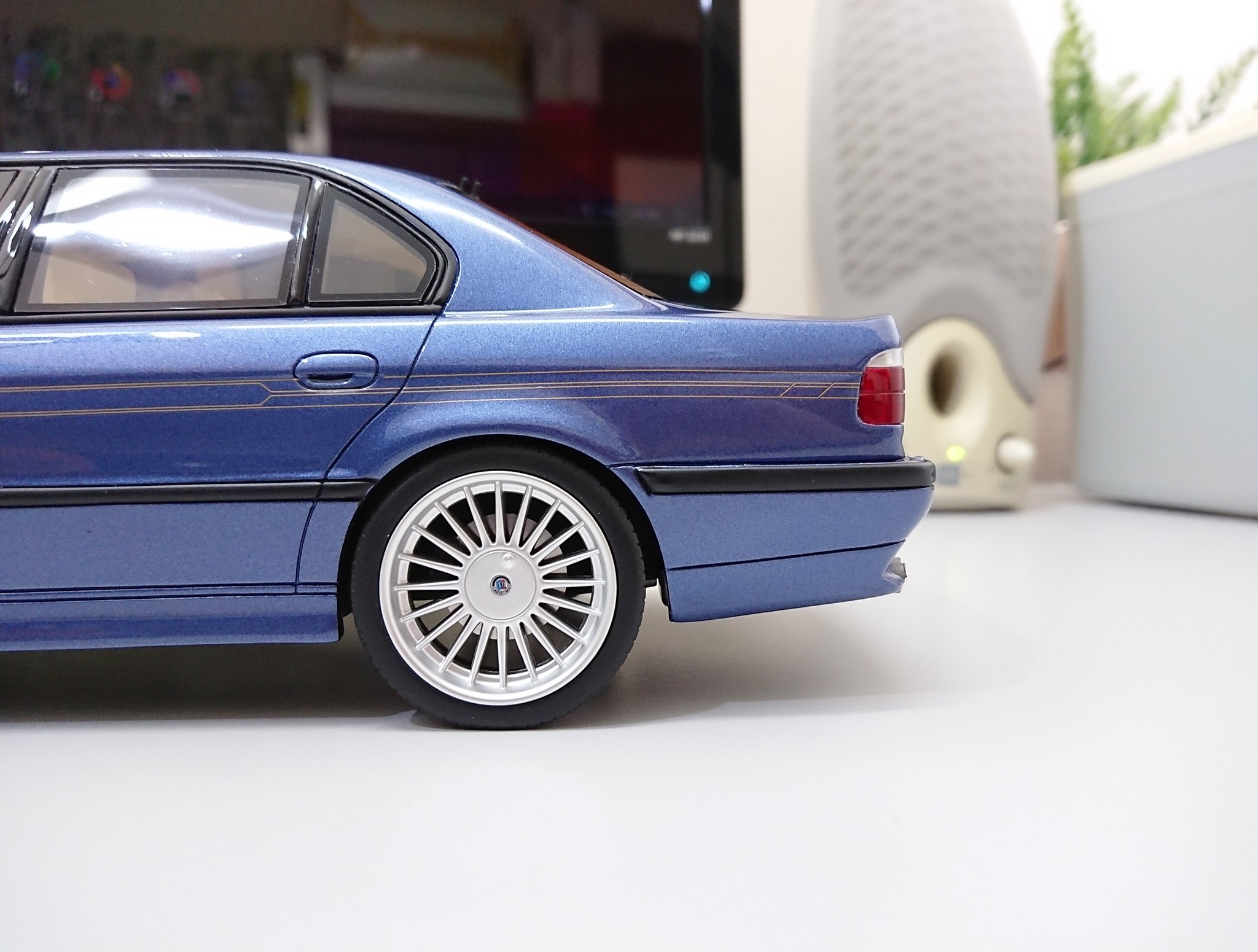 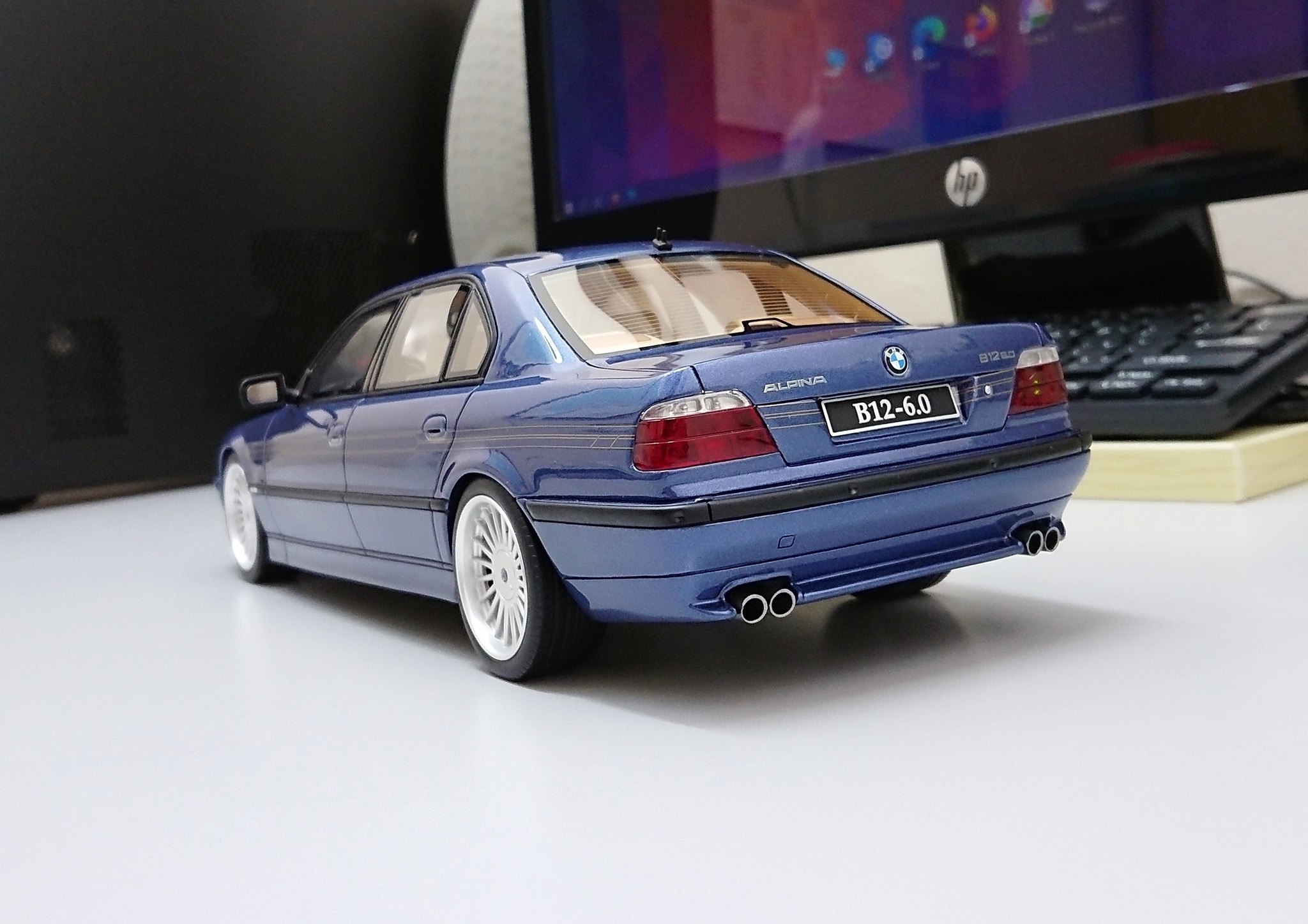 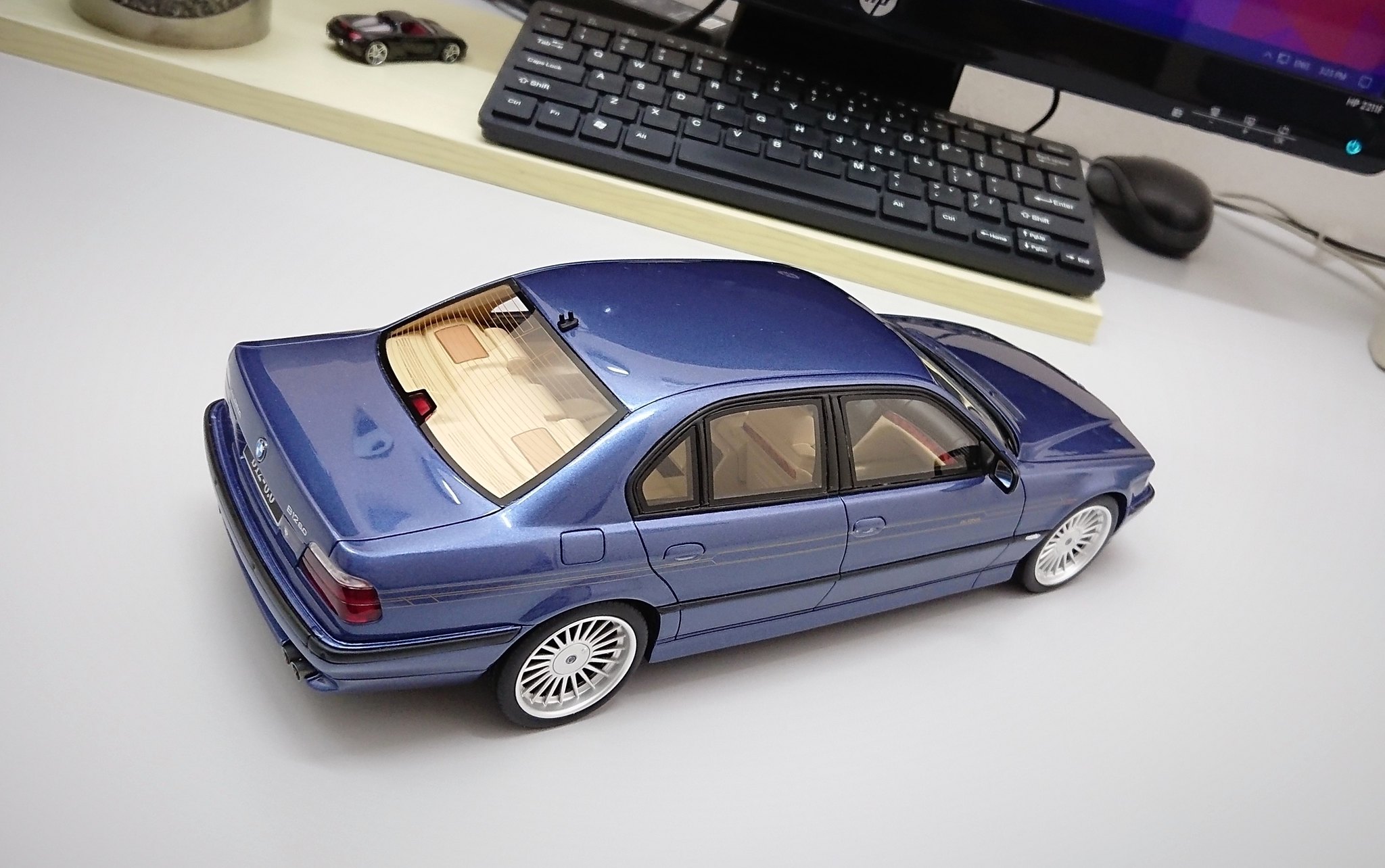 Never thought I’d ever settle for a resin, but here we are. In conclusion, resins probably make more sense at the budget end of the spectrum where buyers may be more forgiving. It's also impossible to deny the excitement a niche model like this brings, while sister brand GT Spirit churns out the latest cars faster than almost anyone else on the market. It’s amazing to think of how many new cars Otto & GT Spirit release each year, and the kind of advanced product planning they go through beforehand. I can already smell the Audi RS e-tron GT brewing in GT Spirit’s studios. That’s a story for another day! 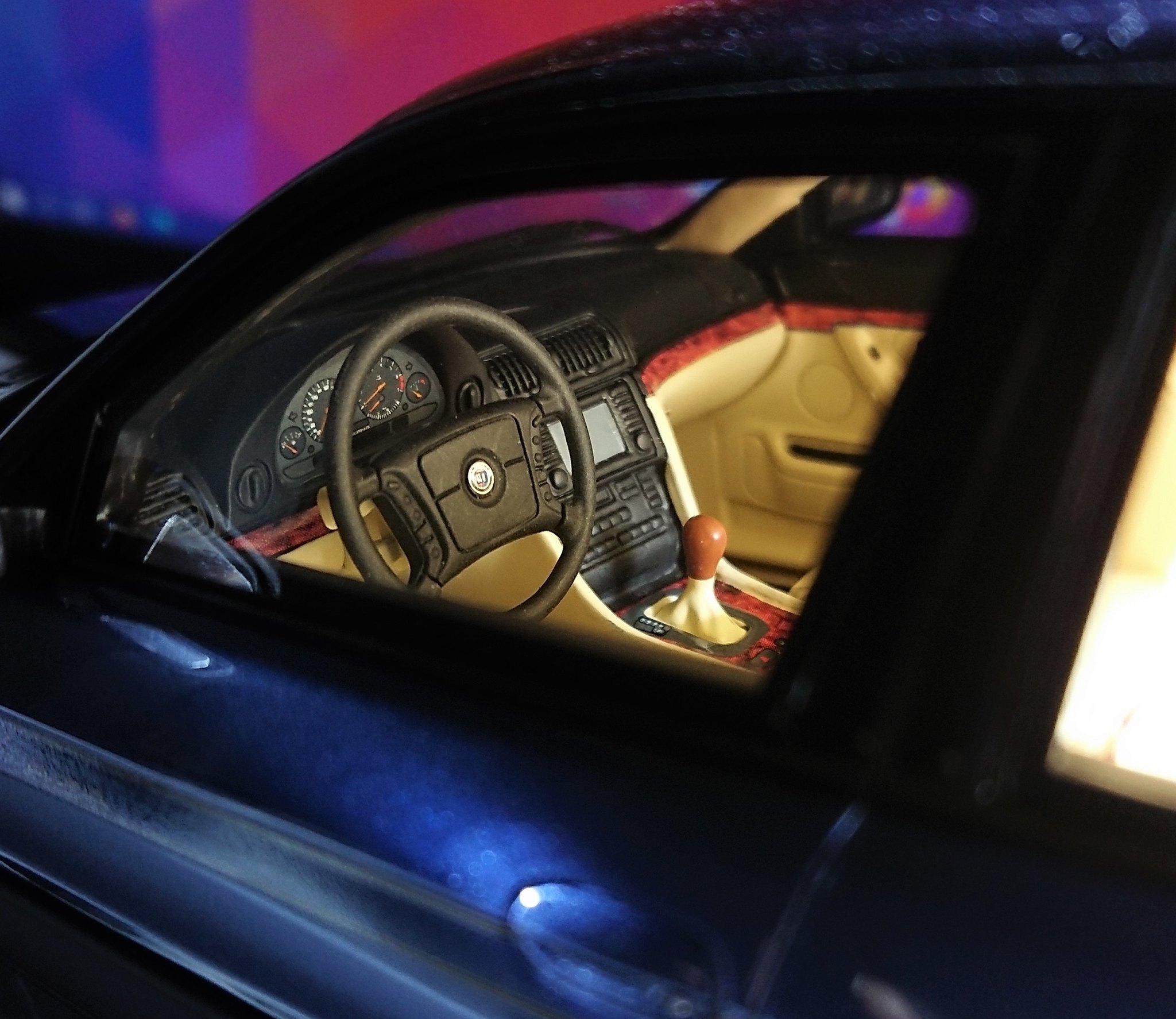 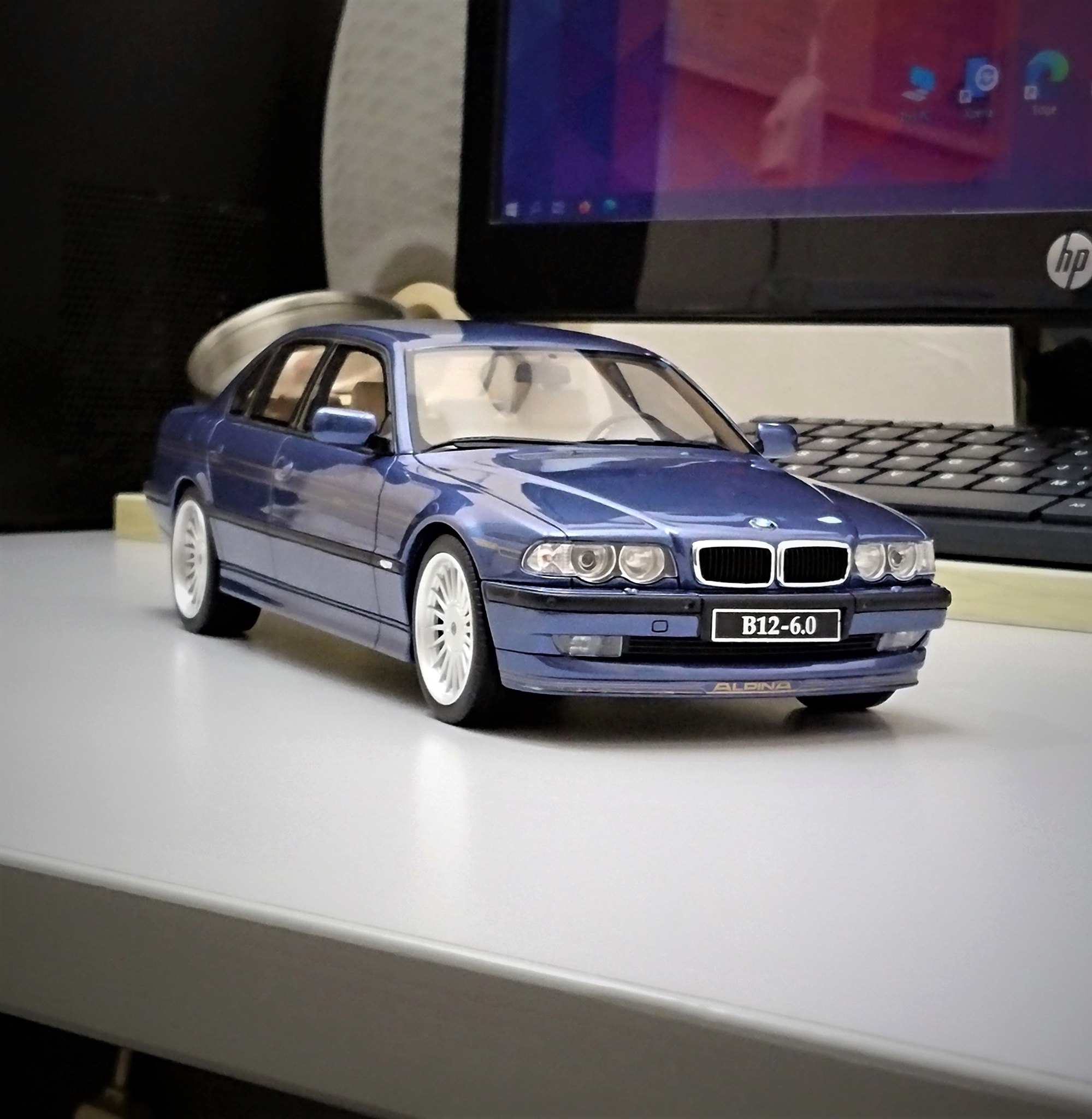 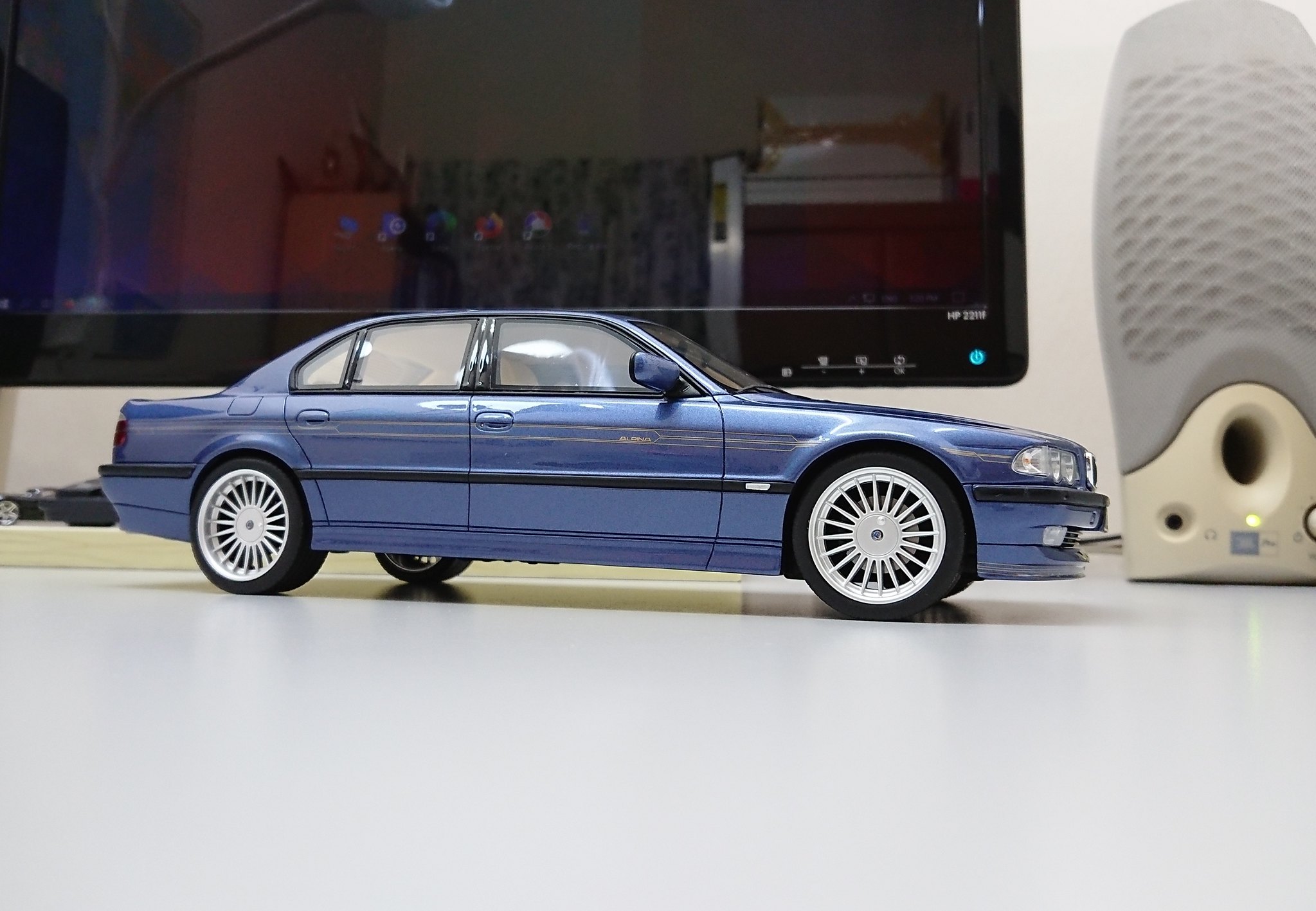 Great review! What OttO does well brings good value from static models. I'm surprised to see they short-changed LWB with SWB. IN short, being a causal collector, I would have missed that!

Windows have always been a sticking point with many, not sure if there is a better way of manufacturing these pieces? The model overall is a mix of sport and class, a perfect mix at that! Personally never added one, wish I did.

You also make a great point best way to purchase OttOmobile is via their website. Cheap and guarantees delivery too!

PS - Please email the team the photos, we love to publish this review on the main website!
Top

Thanks Kraftig! Yeah the E38 will always have a special spot for me, so getting this model was a big deal (personally). I think we can overlook all those minor shortcomings, especially if you pre-ordered them! Hahaha.

Will email over the photos soon, thanks in advance