Here is a model I don't see very often portrayed on different forums. It's the Fronti-Art Aston Martin V12 Zagato.

About the car:
The Aston Martin V12 Zagato is a British sports car/endurace racer made by Aston Martin in collaboration with Zagato to celebrate a fifty-year partnership since the Aston Martin DB4 GT Zagato. Introduced in Lake Como, Italy at the Concorso d'Eleganza Villa d'Este on 21 May 2011, the Zagato was awarded with the competition's "Design Award for Concept Cars and Prototypes" which has also been won by the One-77 in 2009.
Like the Aston Martin V12 Vantage on which it is based, the V12 Zagato is powered by a 5.9-litre AM11 V12 engine first used in the DBS which produces 510 bhp (380 kW / 517 PS), and 570 N⋅m (420 lb⋅ft) of torque.
The design features a new handcrafted aluminium body with the front similar to the Vantage with differences in the roof and rear section. Another difference is the endurance racing fuel tank carrying up to 120 litres of fuel.
Following a large interest by customers, Aston Martin announced they would produce a homologated version of the car, producing only a limited run of 150 at the Aston Martin headquarters in Gaydon. Starting delivery in the second half of 2012, the Zagato was priced at around £330,000 excluding local taxes.

About the model:
First of all, this model doesn't come cheap. Fronti-Art made the decision to make this resin model fully openable, but it comes at a staggering price point of 655 euro (the price I paid, nowadays it's even higher). So, what do you get for your hard earned money?
Well, it's a limited edition. This red colour, that was also the introduction colour at the Concorso d'Eleganza at Villa d'Este, is limited to 150 pieces worldwide (just like the real one). Fronti-Art has made a rainbow of colours available (Britisch green, Tiffany Blue, Orange, White etc), but for me, this red really stands out. The colour is rich and deeply applied. This is were resin really stands out. I have never seen such a paintjob on a diecast model. Grilles are perforated, the badges are PE and very delicate applied. Carbon Fiber is executed very well and shutlines are very fine and crisp. Icing on the cake has to be the rims. Unbelievable attention to detail is applied in these gems. Unfortunately, front wheels aren't steering, only rolling.
Bonnet and trunk open rather convincingly on nice struts. It doesn't feel flimsy as I would have suspected. Engine detail is good, but not as impressive as one would hope for this pricetas. In their defense, it is a fair replica of the real engine, which lacks in detail aswell.
In the interior, we have very nicely executed sportseats, fabric seatbelts and realistic buckles. Carpet isn't installed, but they recreated some sort of flocking which looks rahter nice. Dashboard is very well done, with tons of details and the steering wheel has an alcantara look. All is very well done. Trunk can bet opened, but not much to be seen over there.
So, is it worth the 650+ euro pricetag? Probably not, but if you're an Aston Martin enthousiast like me, it's a very nice addition to any collection. As far as I know, no other options (with opening parts) are available to have this Zagato version. I'm actually very happy to own this little treasure, as the looks of it are breathtaking.
Over to the pics now 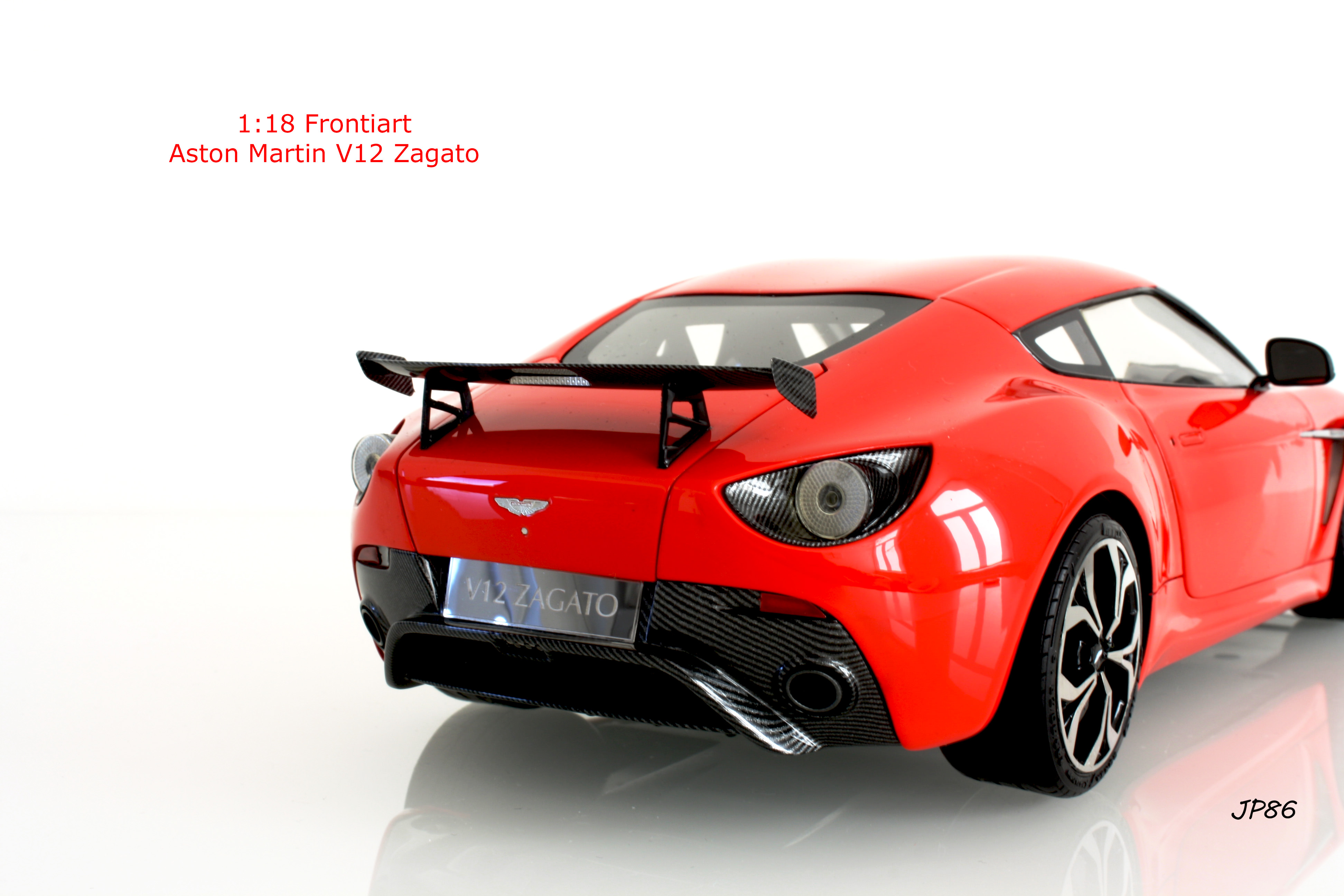 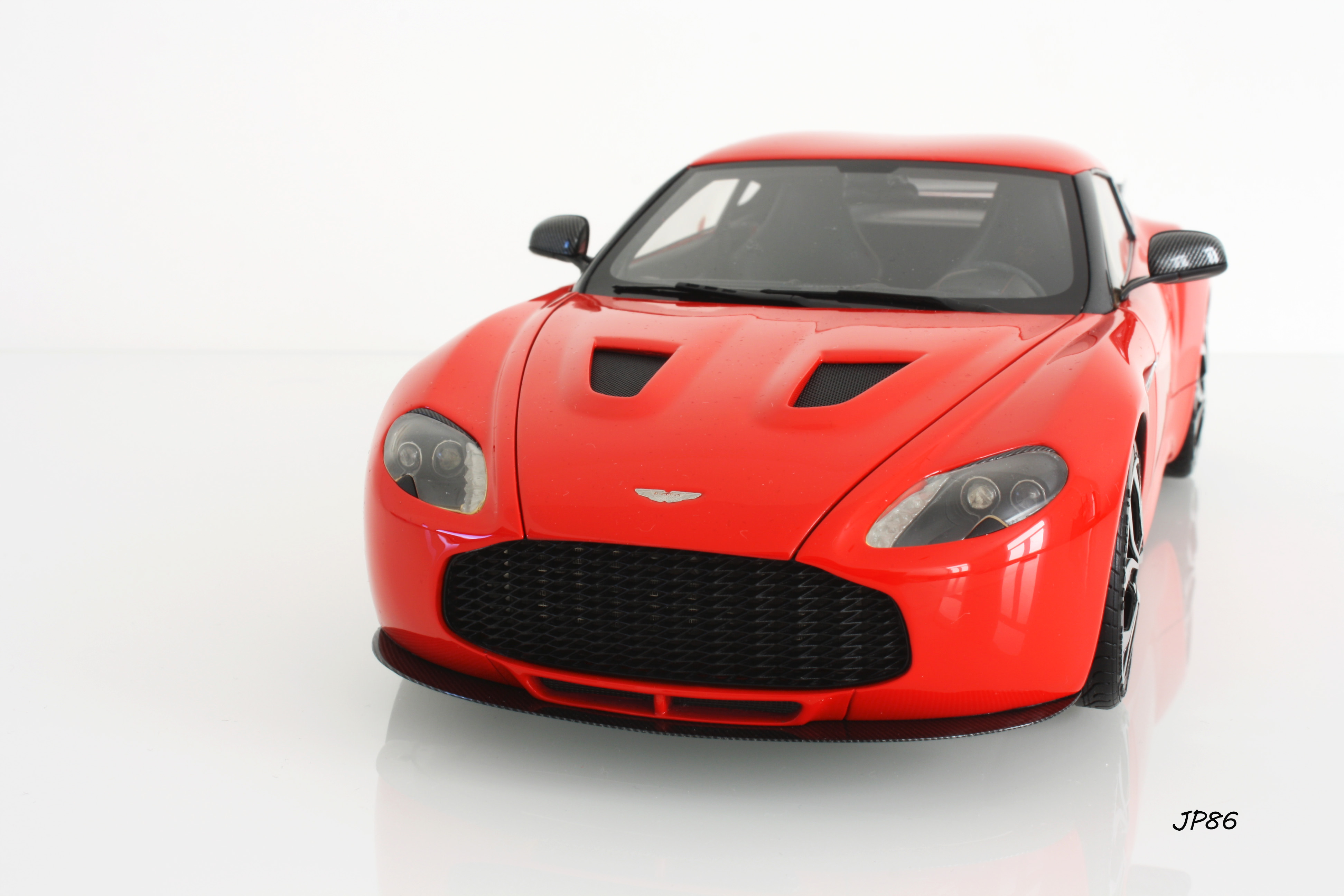 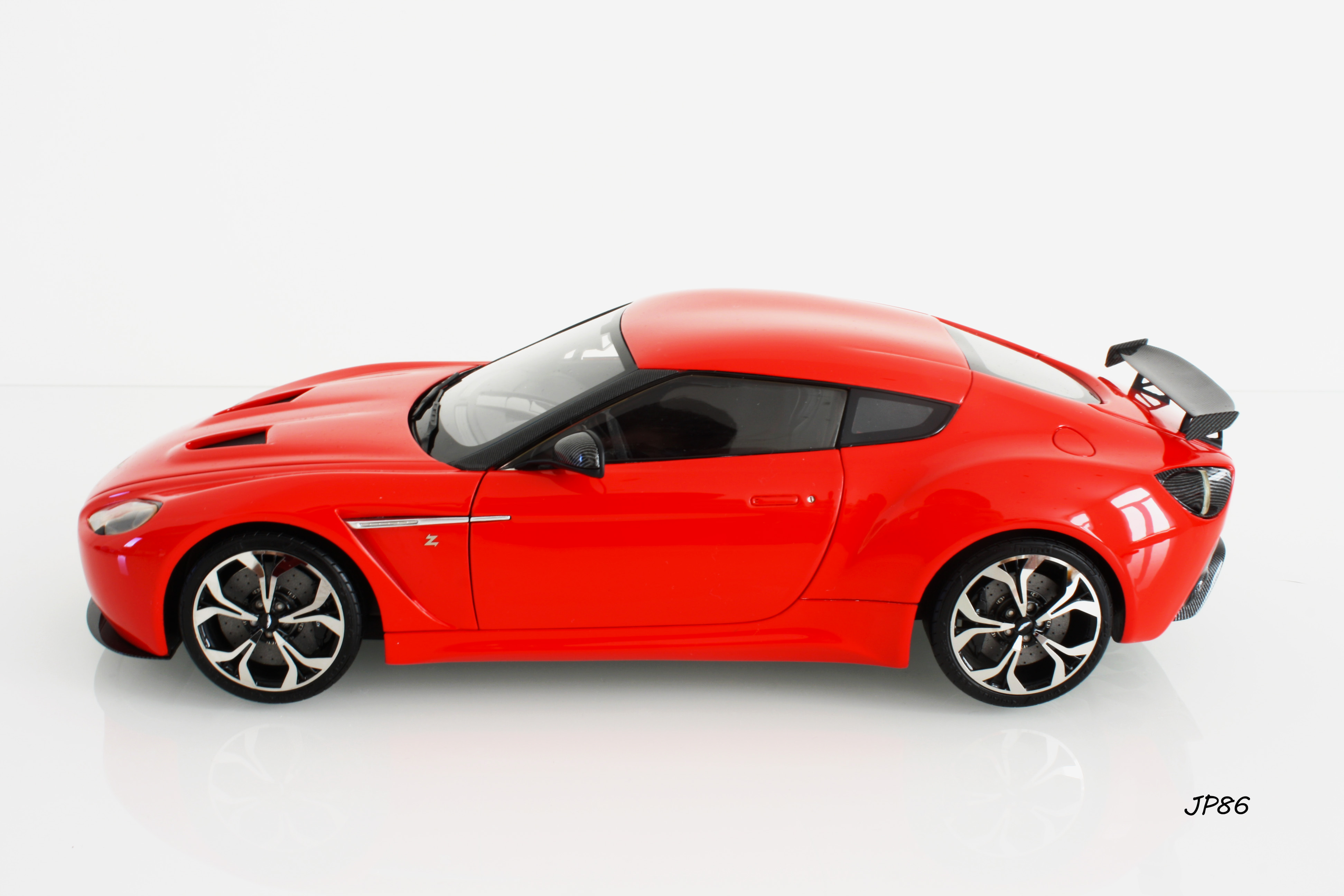 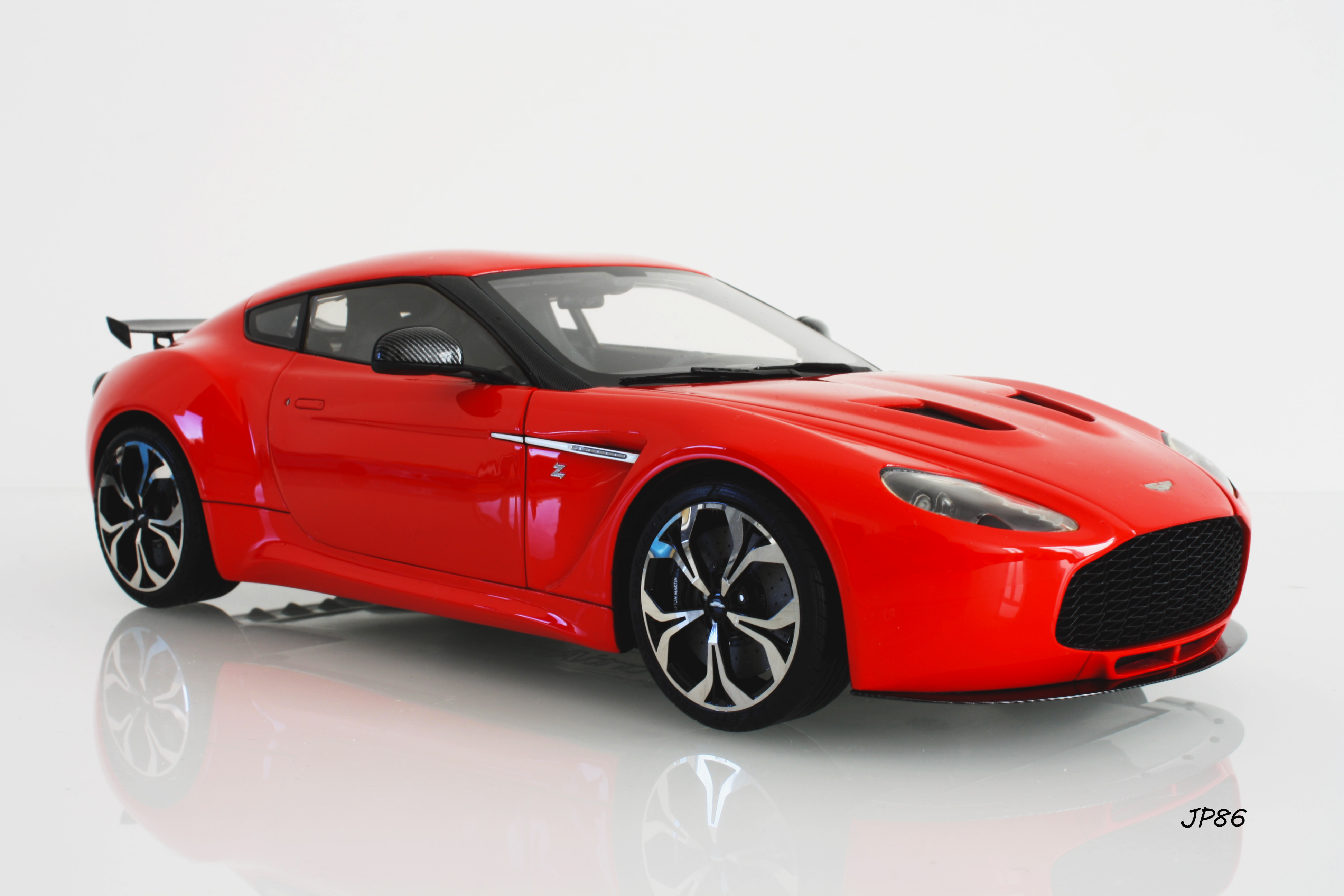 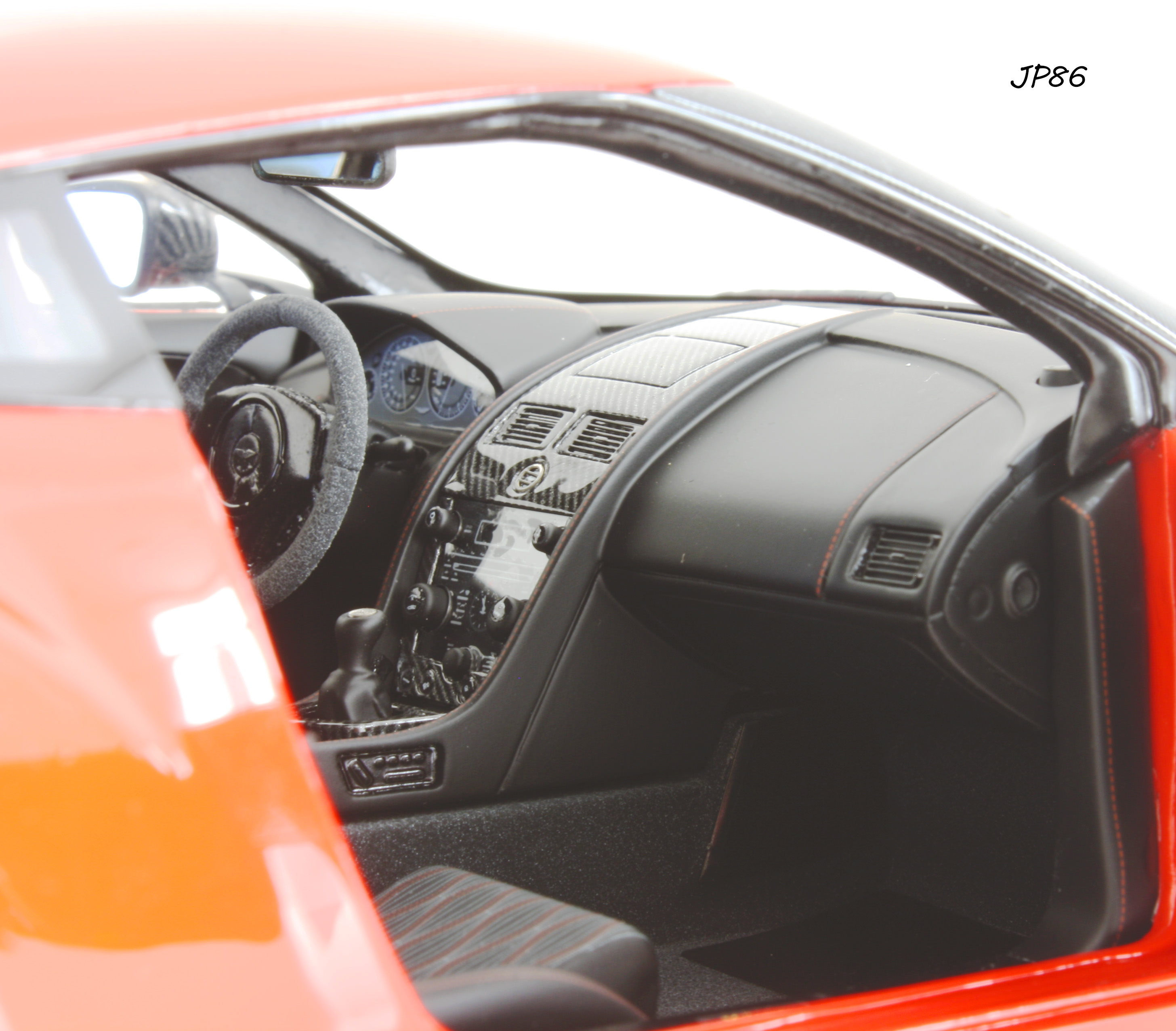 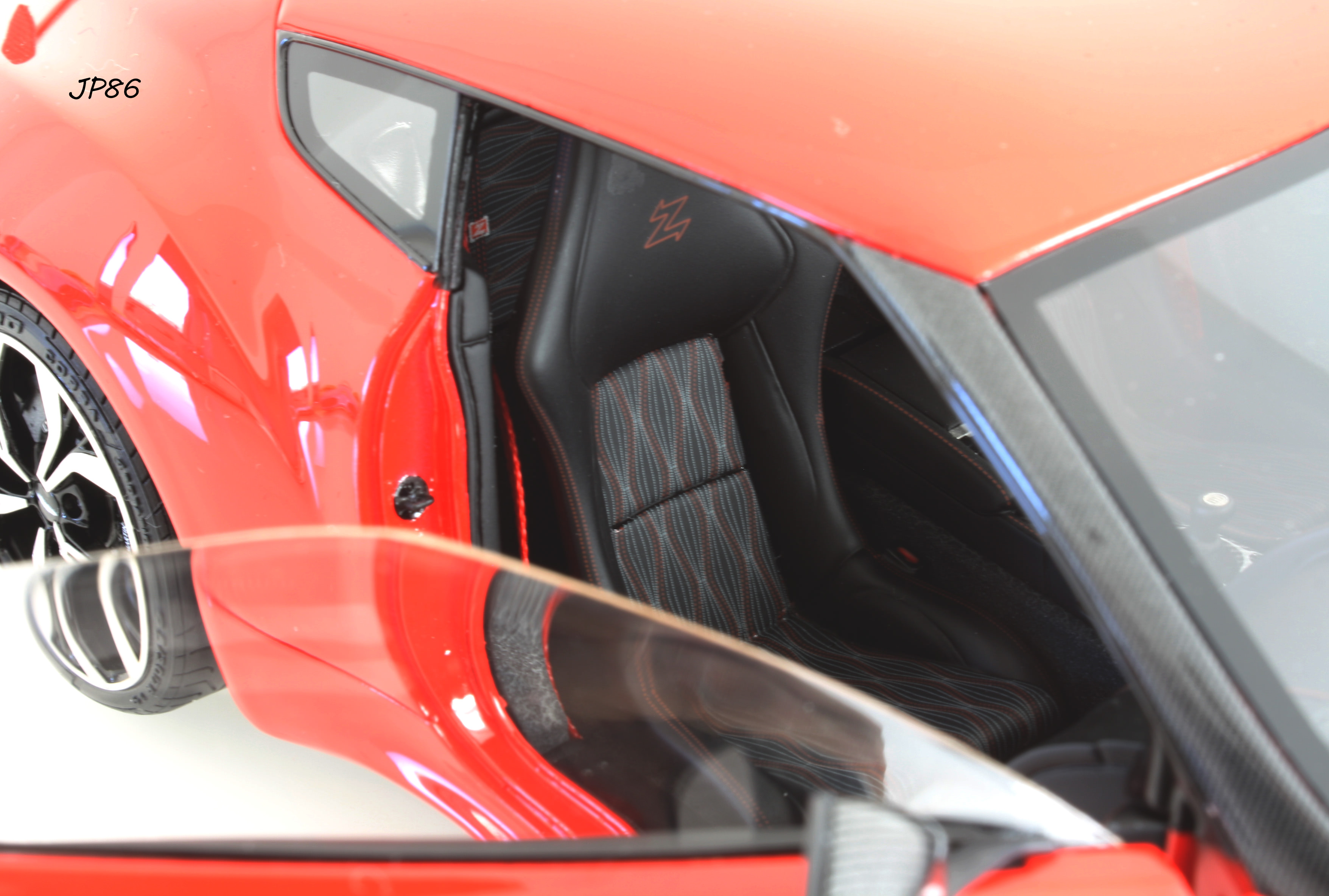 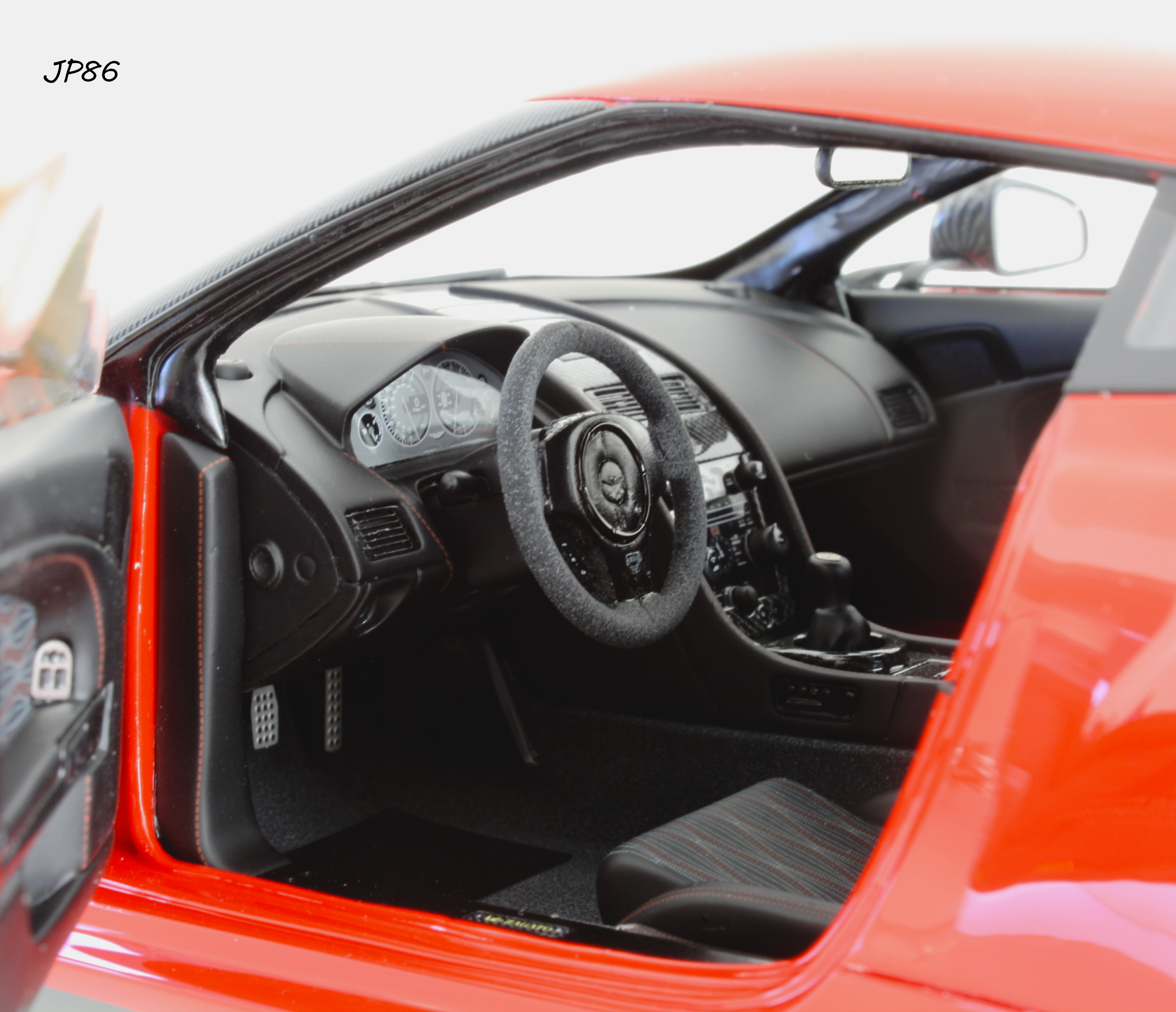 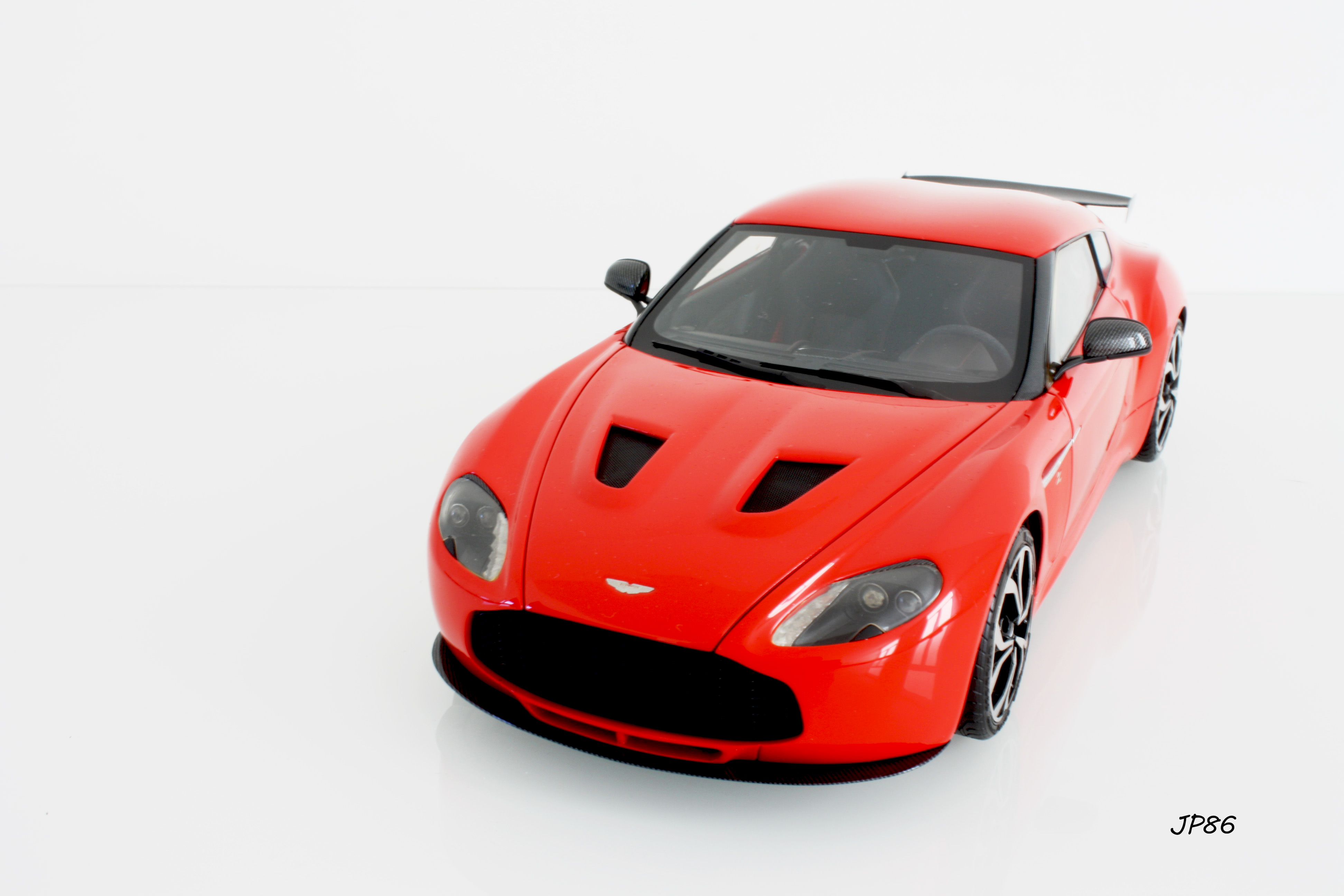 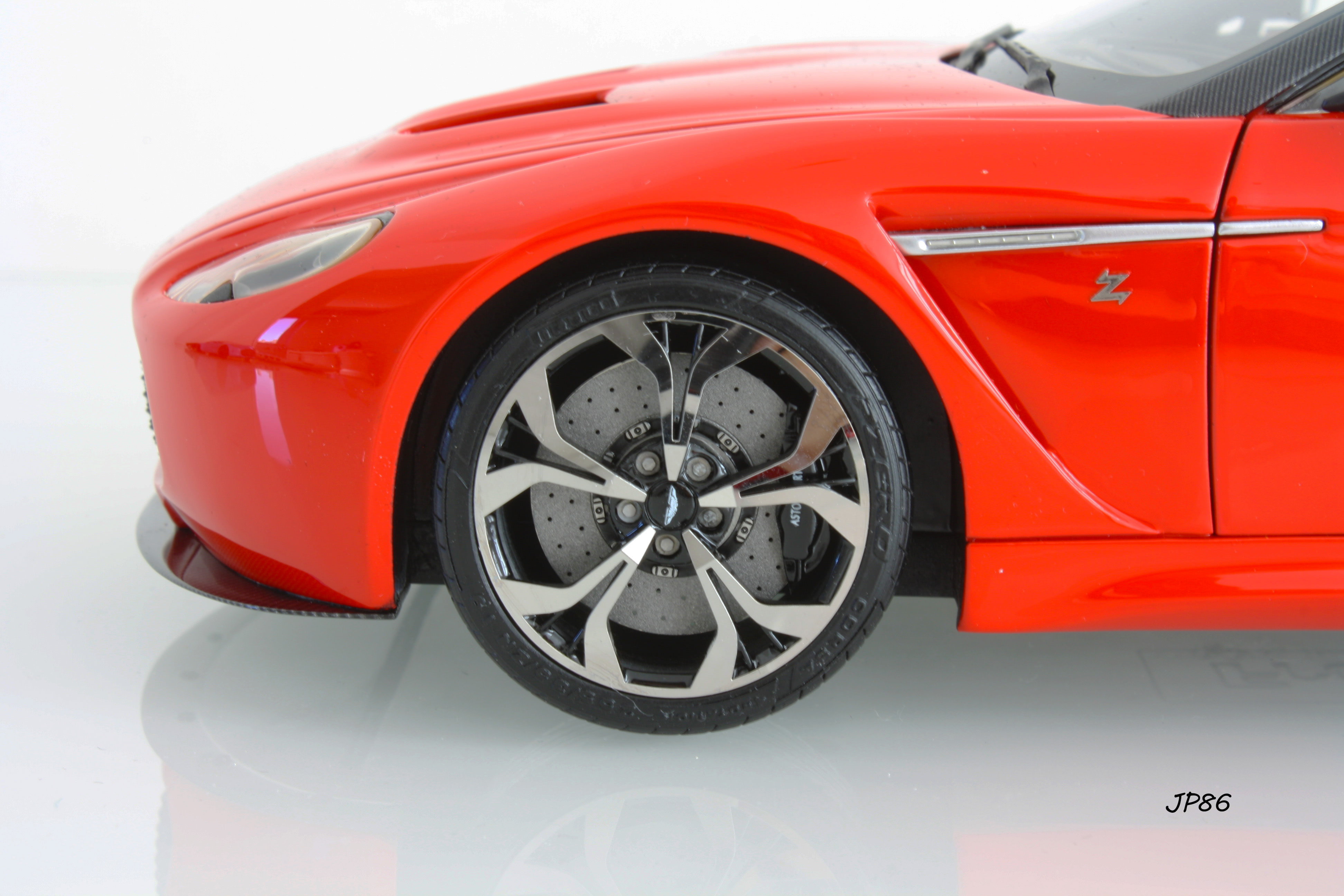 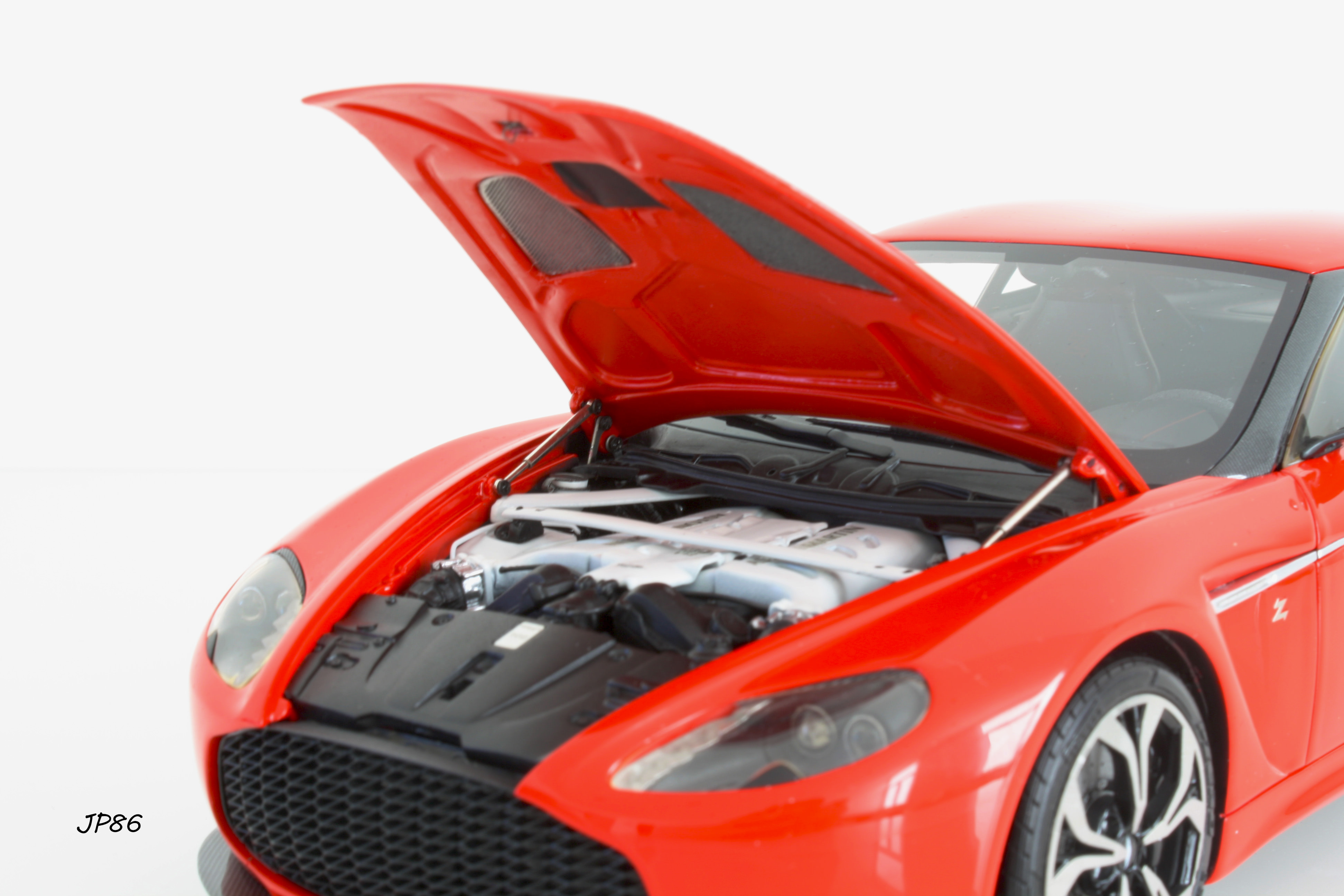 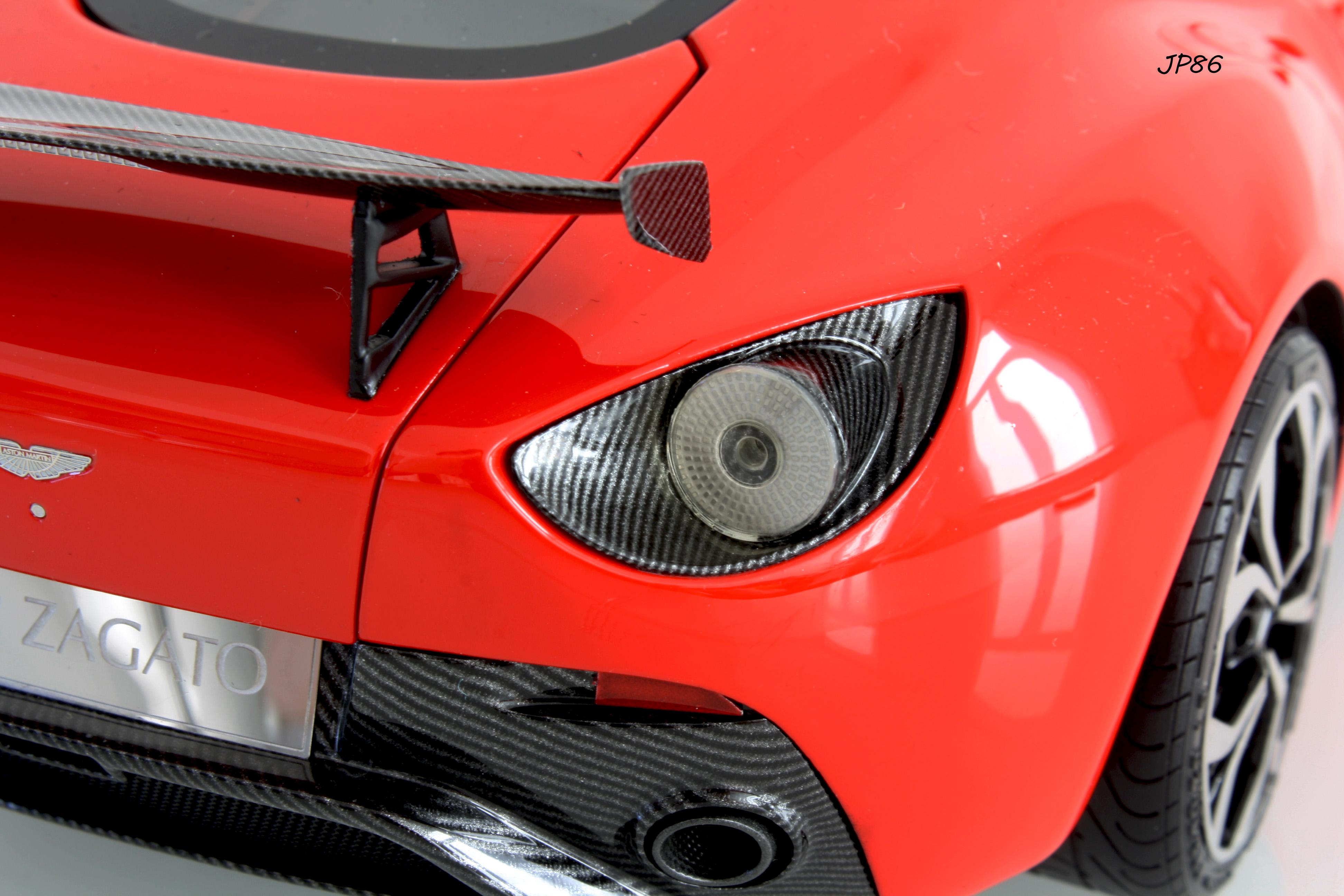 And togheter with the one-77 (I opted for tiffany blue, as I have this model in villa d'este blue aswell) 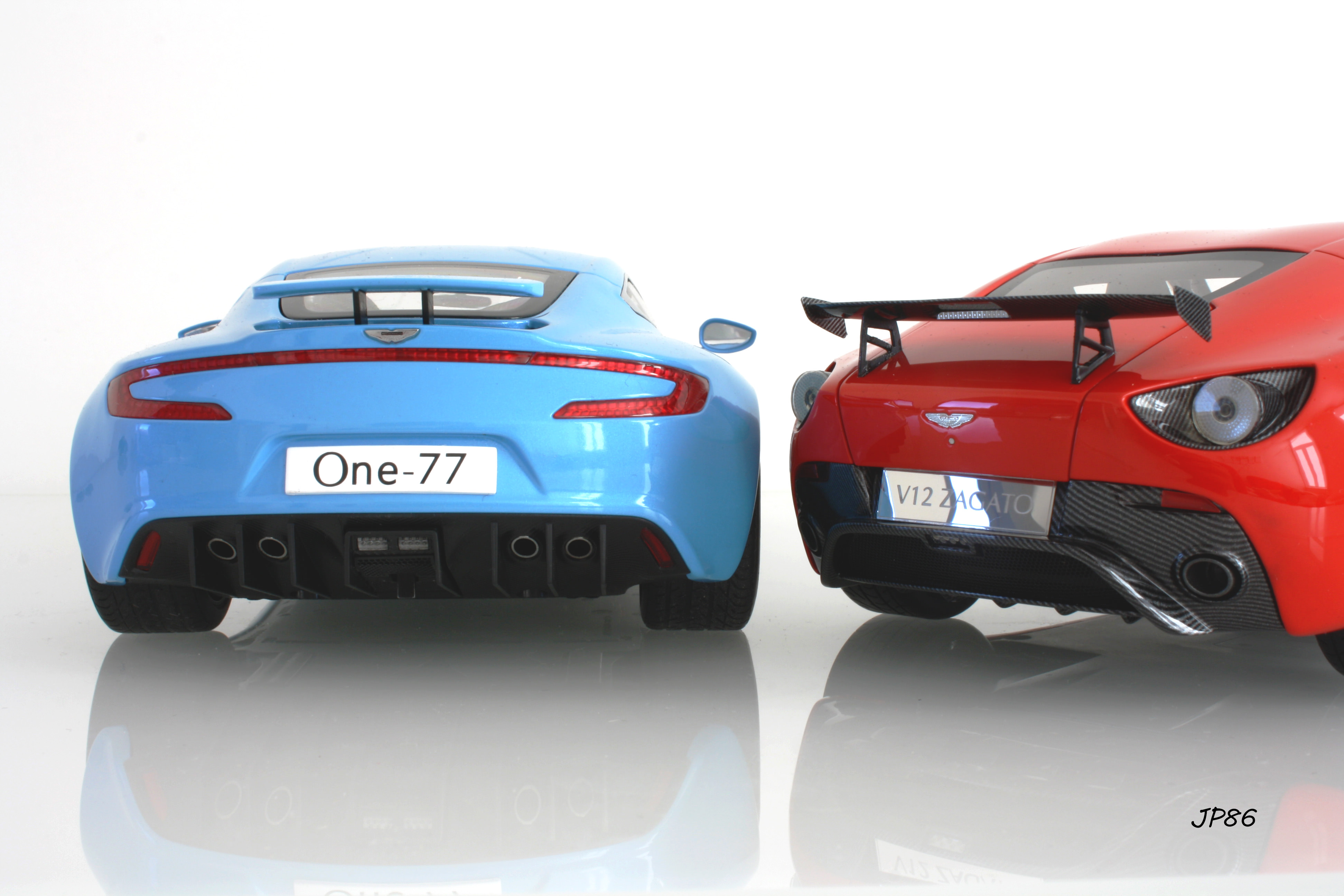 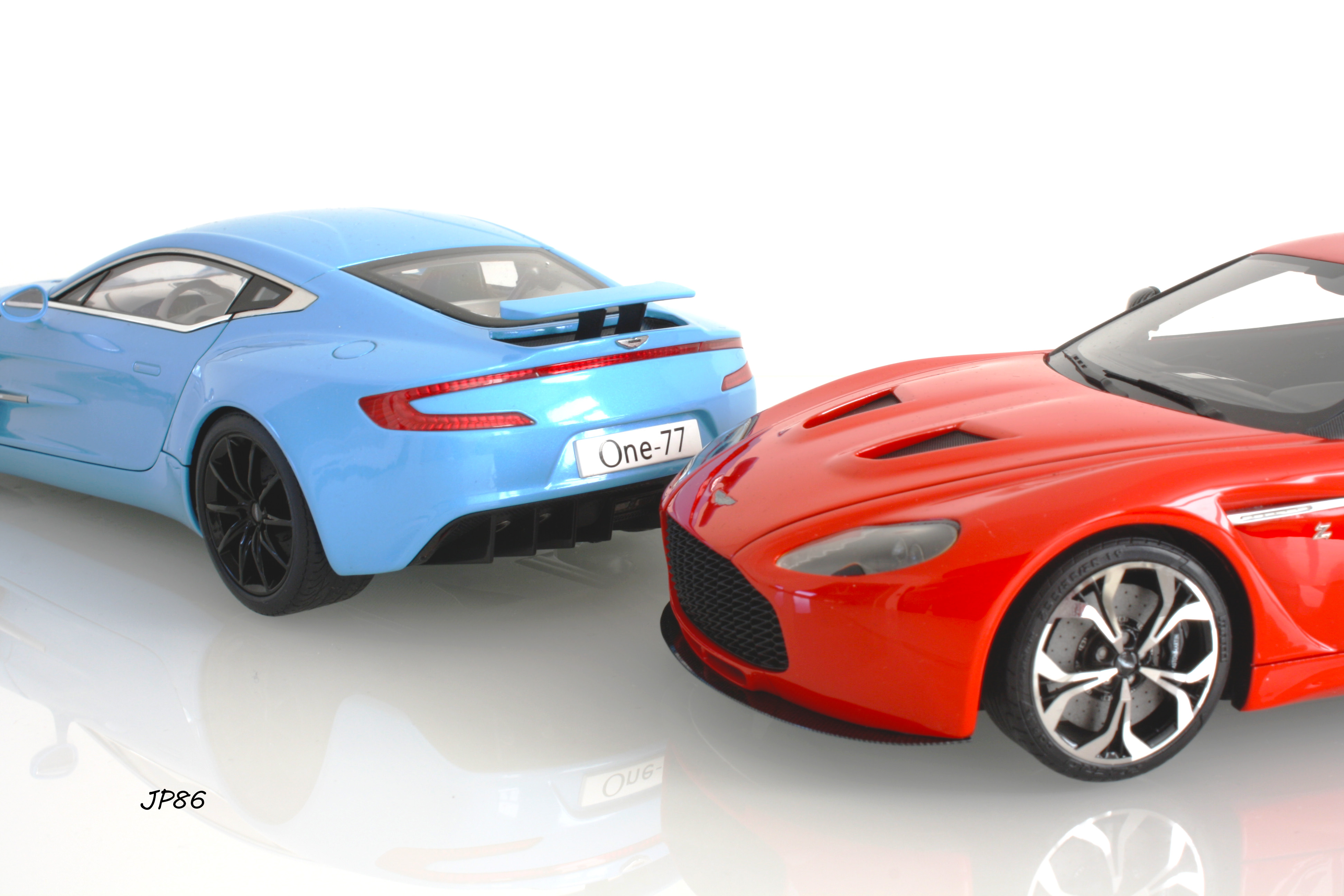 Thanks for watching.
Top

Love the car and the execution from Fronti-Art, but it is well beyond my $400 cut point for me.

A very nice, very rare model, thanks for the pictures.

I've been trying to find one in Green for some time myself...